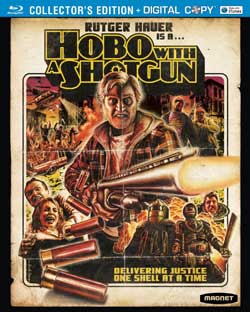 A hobo turned vigilante blows away crooked cops, pedophile Santas, and other scumbags with a pump-action shotgun while trying to save the life of a prostitute.

The town is called “Hope Town”. Or at least it was before the “Hope” was painted over with “Scum” instead. This is where our titular Hobo hops off of a train looking to make collect some cans to cash in for change as he decides to save up for a lawn mower so he can start mowing lawns for a living. A respectable living is all he wants. Rutger Hauer is the star of “Hobo With A Shotgun”, which is without a doubt the most fun The Black Saint has had watching a movie this year. The film is a near revelation..a gore splattered homage to all things grindhouse & a love letter to the people who specialized in making films like this way back in the 70’s.

The script is short & sweet and gets right to business. As soon as Hauer gets into Hopetown, he finds himself surrounded by rampant crime in the street. And the local populace is helpless against any of it. A man asks him if he’d like to participate in a “Bumfight” for some money. He then witnesses the beheading of a man named Logan by his brother Drake (The local crime czar) & his 2 nephews (Ivan & Slick). They do this by attaching a manhole cover around his neck, dropping him into a sewer hole so that only his head is above ground, attaching one end of a barbed wire noose around his neck & the other end of it to a car and pulling it off. As the arterial spray sprays upward, a stripper wearing a white fur coat & bikini dives right into it & allows herself to be drenched in the blood as she cavorts shamelessly, licking her fingers as if she’s having her own little blood soaked orgasm. This all happens in the first five minutes of the film, which just starts rolling downhill right after the credit sequence. Gaining speed & taking absolutely no prisoners whatsoever. It only gets better as our hobo finds out that there is a local club called “Drake’s” run by Drake & his two sons. As he enters, he finds an orgy of over the top violence taking place as teens play videogames in the background. A homeless man has his head smashed in between 2 bumper cars, another one has his foot smashed to a pulp by a large carnival hammer. And no one really minds either, Ivan & Slick just throw bags of cocaine at them & they are placated. Ivan is about to take advantage of a local prostitute when the hobo intervenes & smashes his face in with a sock full of coins (shades of Bronson in “Death Wish”). He proceeds to make a citizens arrest & takes slick to the local police station but the police are owned by Drake and Slick gets his revenge by carving the word “SCUM” into the hobo’s chest in a very gory scene.

The prostitute (who just happens to have a “heart of gold” by the way) takes the hobo in after he’s left to die on the street (he recovers really quick) & the hobo decides to go back to the “Bumfight” video maker to make some money, enough money to buy his precious lawn mower. He accomplishes this by breaking bottles over his head & then eating the glass. When he goes to the local pawn shop to purchase his lawn mower, it becomes the scene of an attempted robbery. Realizing that he’s about to lose his hard earned money, he takes a shotgun down from the wall & blasts all of their heads off. It’s at this point that our hobo decides that he’s sick & tired of all of the crime & abuse going on & he’s the man to stop it. He’s A HOBO WITH A SHOTGUN!!

It is obvious that director Eisener has done his homework & watched every Troma film ever released. This is the greatest film Lloyd Kaufman ever made & he didn’t make it! But Troma’s influence is all over this movie like stink on sh*t and it’s a wonderfully lurid influence indeed. It veers wildly from some of the grisliest violence it’s been my pleasure to watch in ages to scenes of quiet sunsets & railroad tracks before it goes back to insane scenes of pimps beating their hookers in the street, pedophiles dressed as Santa driving with children screaming for help in the backseat, and the two brothers Slick & Ivan (Gregory Smith & Nick Bateman, who are Tom Cruise doppelgangers circa “Risky Business”) running the streets for their dad, Drake (Brian Downey, in a wonderfully sleazy performance). Eisener also shows that he knows what makes a grindhouse style film worth watching over & over again. Namely, insane amounts of over the top violence! He gives us enough blood & viscera for three movies. He kills pimps, robbers, psychos with women hanging from chains in their basements, any & everyone who is what he refers to as “Vultures tearing at the flesh of all that’s good”. The media catches on & soon the local newspapers have headlines shouting out “Hobo Stops Begging, Demands change” & “Hobo To City: Give Me The Passcodes” & ” Parents Smile As Bodies Pile” all with his picture on the cover holding the titular shotgun (which in true grindhouse fashion, never runs out of shells). What makes the film works is that all involved play it with a straight face. everyone knows the inherent silliness of the script but to ham it up would deaden the effect of it all. And of course Rutger Hauer stands above all with his performance as the hobo with no name. Do you remember how absolutely perfect he looked back in “Blade Runner”? Well he don’t look like that anymore. Hauer’s face is the face of a weatherbeaten man, with wrinkles that look like they’re a mile deep. They surround his eyes & cheekbones like ripples in a pool of water after a stone is thrown into it. He wears them with dignity though & although he plays the role initially as a beaten man, he slowly grows in character & resilience. He even starts to stand straighter as the film progresses. It’s a grade A performance… One for the ages actually.

All of the perfs in the film hit the mark, everyone knows what their supposed to do. If their over the top, it’s because the roles were written that way, not because the actors are mugging for the camera. This too is a tribute to Troma & Lloyd Kaufman & it’s a successful one. Uncle Lloyd should be proud! To continue with the plot would spoil what was for me a sublimely entertaining experience & I don’t want to spoil it for anyone. Suffice it to say that the film gets more & more violent & sadistic, maybe even going a step over the line in a scene involving schoolchildren on a school bus, but if this is what you grew up on (as I did), it’s a stone cold gasser acolytes. And I didn’t even mention the duo called “The Plague” (you gotta see em’ to believe em’), the shot off penises, the hiding in the innards of a dead cop, the man cut in half with a razor blade encrusted baseball bat, the Ice skate electrocutions & all of the heads our wonderfully angry hobo blows off at point blank range!

“Hobo With A Shotgun” gets five shrouds from The Black Saint. I will see better movies this year I’m sure, but “Hobo…” is a special one. One I’m not going to ever forget. It’s an instant classic from the 70’s…magically transported to 2011 & if you’re like me (and if you’re one of my acolytes…you already are), you will relish every single f*cking minute of it. It is sleazy, cheesy perfection. A film for the grindhouse ages, miss it to your own regret!! The Black Saint has now left the building & is headed for Hope town looking for some action!! 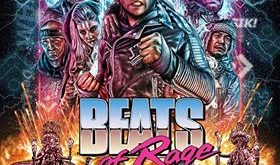