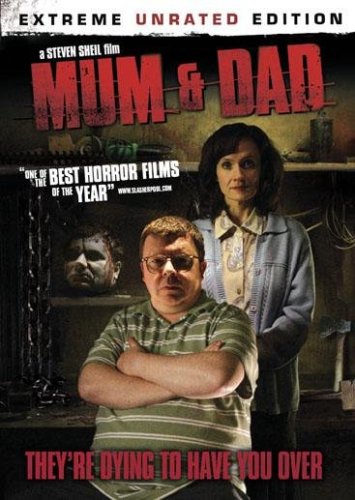 Mum and Dad, and their ‘adopted’ children, Birdie & Elbie, work at the airport. The family live off whatever they scavenge from cargo holds, offices and hotels – including a steady stream of transient workers who populate the airport’s soulless hub. When Lena, a young Polish office cleaner, is befriended by Birdie, she gets drawn into a nightmarish world of torture, murder and perversity. Imprisoned in a suburban House of Horrors and designated a ‘Mummy’s Girl’, Lena’s only options appear to be to become part of the family – and join them in their insanity – or die.

Take the brash authoritarian viewpoint espoused by Harry Potter’s adoptive parents – “Be grateful for what we’ve given you!” – throw in brutal torture and an epic level of perversity, and you have an idea of what it’s like to be a member of the family ruled so tyrannically by Mum & Dad, the eponymous villains of the first feature length thriller from writer/director Steven Sheil. 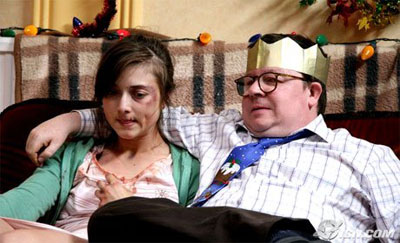 Father, a large bespectacled man with an affinity for early morning p*rn, rules the roost while mother, who is a stones throw away from looking like a Sharon Osborne that aged without the aid of plastic surgery, keeps the kids in check so as to prevent father from going all ball peen hammer on their heads, metaphorically speaking, of course. Daughter Birdie, who reminded me of Anna Paquin less the hotness due to her shrill British accent and the apparent longing in her eyes to sever penises, is the apparent Mommy’s girl while Elbie, her (presumably) adoptive brother, is a mute whose sympathetic eyes belie his complete and utter subservience to mum and dad. They make their wages by stealing from unsuspecting folks at Heathrow Airport and selling the ill-gotten goods to friends.

And you thought your family had problems.

Lena is the newcomer to the family, kidnapped under the promise of a place to sleep after Birdie causes her to miss the bus home after a long night of work as a janitor at Heathrow. Instead of a quiet place to sleep for one night like promised, she is unwillingly entered into a permanent contract, held against her will and forced to work and obey. If she works, she gets a roof over her head and three square meals a day; if she disobeys, punishment is simply rendered in the form of “Dad.” 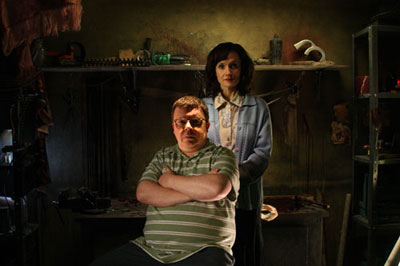 The film, though dark and reminiscent of other films of its kind (Hostel? We’ll get to that in a moment), portrays at times a comically absurd and deeply disturbing look at what happens when the problems associated with typical families are transferred upon a family that is anything but. Children bicker; they fight for their parents’ affection, but, in the case of this family, have the threat of sedatives being shot directly into their necks.

Early on in the film Lena picks up on the notion that subservience equals freedom. Much to the chagrin of Birdie, Lena attempts to drive a wedge between her and mum, acting as a “good little daughter” who just wants to please mum. This fails when, in what I found to be a fairly contrived scene, Lena steals a cell phone and Birdie calls it, alerting mum to its presence and Lena’s act. This signifying act of disobedience reveals the depths of emotion in the characters, something often overlooked in films of this genre.

In this vein the characters are the strongest not when engaged in their murderous ways, but when they wear the mask of normalcy. Their seemingly wholesome methods of familial love, though rare, belie their murderous nature in a way that makes you believe that, despite being absolutely psychotic in every possible way, they genuinely care about their new “adopted daughter” and simply want the family to be as normal as possible. 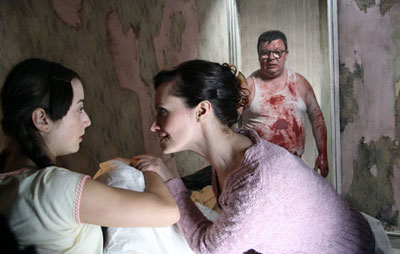 Now, I want to discuss what it represents, and, if we’re to believe my fairly biased and cynical viewpoint, what it means as a whole for other films of this subgenre.

This film has been described as “torture p*rn,” though I believe this to be an incorrect assessment. The ascent of the oft maligned “torture p*rn” subgenre of horror films, has resulted in a slippery-slope of genre assignment. In recent years, with the advent and subsequent (and confusing) popularity of the Saw films – and a whole slew of other one-off “torture p*rn” films – any film that even mentions the word torture is assigned this unfortunate moniker indiscriminately. It doesn’t help that many of these films are marketed as such, with the underlying storyline, acting, etc taking a backseat to “the most violent film ever made!”

Mum & Dad is not that film. The perceived ubiquity of sadistic torture and violence doled out upon the helpless Lena is heightened solely by the way the film is presented to the viewer through marketing. It’s often been compared to Hostel, which is an insult to Sheil, since Hostel merely took torture to the level of pure voyeurism, eschewing plot and characters in favor of graphic violence. In actuality, Mum & Dad is starkly real, devoid of over-the-top torture scenes and anything that can really be considered excessively gory. It is gross, though. Body parts are used as sex toys (what their primary function used to be is anyone’s guess), and intestines are wrapped up in cellophane during casual conversation over breakfast. 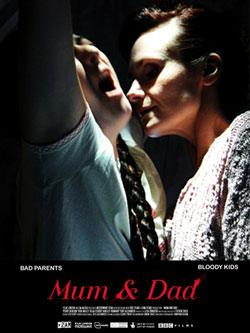 Mum & Dad is micro budget horror at its finest.* Expertly shot, brilliantly cast, and possessing a comfortable level of violence so as to not distract from the film proper, this is what happens when a true horror fan makes a horror film. Steven Sheil, I salute thee.

*Filmed for approximately $200,000. It’s been steeped in controversy concerning its method of release, as the filmmakers decided to distribute it in theaters, DVD, and online as a download and streaming movie at the same time. 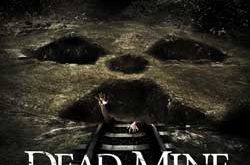