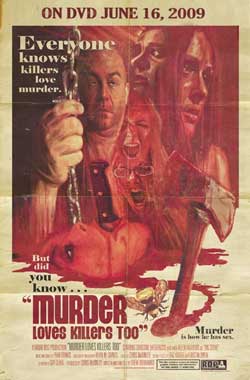 Big Stevie has a sexual problem. Murder is how he has sex. And Big Stevie knows that there is no better way for a repressed killer to blow off steam than killing a bunch of care-free free-spirited teens. After her friends are all chopped, carved, and slashed, sweet young Aggie is left alone to face off against this unreasonable psycho. Now she’s got a pervert on her hands. A big one. And Big Stevie’s problem could become Aggie’s problem real fast.

A number of independent features come across my desk in the course of a year. So its really a treat when one comes by that is full of surprise, professionalism and balls. “Murder loves Killers too” is that film. Before I get into the zany content , let me say the production is top notch. Great cover art, great posters, great film technique and great direction. Not to mention a stellar performance by the acting team. It’s typical to instantly make associations as a film reviewer. It’s almost embedded in the blood somehow.

So while every film has its contribution level you can still make comparisons for readers sake. Let just say the MLKT almost feels like a 70’s film that’s not filmed into the 70’s. I suppose this is due to the eye of direction, story content and plot directions. Then you could also say it has a firm bit of 80’s in it as well, The idea of teens who go to a cabin and are assaulted by a killer. The idea itself seems pretty basic and derivative if you end it there. However there is a bizarre sense of plot changes in the film that really make it it’s own beast. The plot changes are unique as they are unveiled in a linear fashion that has no prologue or consumer delivered reasonings. They are fed to us as the director feels the need and not until.

Our story starts like most, a group of teens ready to party in a forest located home they rented for just that reason. Everyone is living it up, rocking on and concerned with not much more than what the day brings and having sex when it calls for it. A pretty nice house set in the woods has all the makings of a getaway home owned by some wealthy owner. All is going as planned. there is only one problem. The owner of the house is a killer and has hidden away in the basement to single handed ly murder them off ne by one. It doesn’t take long to get into the killing. Our silent assailant who calls himself Big Stevie waits each victim out till he can snatch them away for some brutally old school style.

Yes it’s Jason without the mask, Leatherface without the leather…take your pick. Our killer who never says much resembles that of a middle class car salesman who happens to also be a neat freak. What is amusing is how he goes about getting his victims. Hideaway nooks, locked doors or just simply sneaking up from behind he murders his victims like a man taking care of his laundry. We get some real nice murder scenes. A meat hook hanging, a gut wrenching stabbing, a knife though the back of the head…..and a few more inspired kills by classic horror films. It’s pretty apparent that the filmmakers are horror fans and have done other homework. Tension is introduced with precision timing.

Drew Barnhardt doesn’t frame like a newbie. He pays close attention to the angle of the scene and shows us just enough to work for the moment. Now here is the interesting thing. Barnhardt does something that we don’t see too often in these genre films. By the last act the killer speaks to his victim. Though not a grunt, squeal or backwoods slobber but in an eloquently precise gentle manner that quickly changes the perspective of the mindset of the killer. It appear our assailant is well educated, filled with deep emotion and understands exactly the situations at hand. Unique to say the least. If that isn’t enough for ya, then see if ya can phantom his rather mundane home life that he participates in, in a pretty ordinary manner. The film is by no means humorous, though there is humor is the situations and how they translate to its viewers. Brutally sadistic, fun and violent in an unforgiving way ….a great product that excels for independent releases and a triumph for the genre. 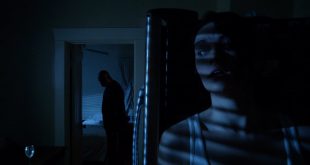 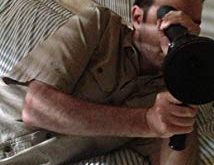