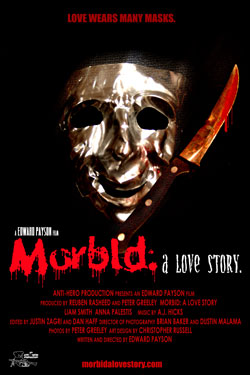 Christian is a typical college student, besides the fact that he is a serial killer. He sees death as the greatest art form, ranking his targets by degree of difficulty and making his victims his easel. Christian takes a liking to Belle a girl in his class and falls in love. He decides he wants to lead a normal life and stop his killing ways, but old habits die hard

I wasn’t sure what to expect in this one. The trend nowadays is to point and shoot with hopefully a decent story to emerge in the process. Morbid: A Love Story (2009) is actually well written in that it’s a humorous and enlightening script. Now fans of “Behind the Mask” will embrace this one with open arms. In fact if I remember correctly “Zombieland” had a bit of this approach as well. What approach you ask?…That is pointing out the obvious traits and concerns when embarking on a road of serial killing.

Yes, the art has its share of choices, concerns and methods that have to be analyzed to a certain extent. My guess is to become a successful serials killer you just can’t “go for it”. Why? well you’d get caught the first day and there fore you wouldn’t really become a true “serial killer” Christian (Liam J. Smith) is one such individual who has taken the time to think things out.

In fact he only really targets those deserving in his mind and ones who present a higher level of difficulty. This aspect is showcased in difficulty levels being subtitled across the screen. Clever stuff! as we learn more about him it seems he is content on living a normal life, but has serious serial killer compulsions. Working during the day, hangs out with his friends at night and steps out occasionally to kill someone. His methods are pretty brutal which counter balances his persona which is more of the boy next door kind of role.

When he chance meets a pretty young coed by the name of Belle (Anna Palestis) while she is waitressing, he begins a honest relationship that has him soon falling head over heels for her. This new range of emotions seems to be at bitter conflict to his day to day killing spree. So much that even when pushed his ability to kill is seriously hithered. The story in its gruesome style killing combines a light romance approach to present a interesting mix that could almost be considered light hearted.

Though make no mistake, when Christian sets out to itch his urge its done with extreme brutality and with a sense of separation. Even with his sometimes clumsy approach his methods are pretty solid and well thought out. Though the psychosis of his kill urge begins to also pay its toll upon his concentration. Passerbys start to take the form of murder scenarios that constantly play inside his head. With a love interest taking form, its clear that his ways will have to take a back seat if he wants to make it all work. Morbid features a ensemble of extras who serve as interactions with Christian’s daily life. The film keeps you guessing till the end on what the outcome will be and works like a charm.

The film is written and directed by Edward Payson who has created even on a low budget level a pretty cool tale borrowing from similar themes but holding up its own. If there is a message to the film it would be that the monster we fear could be as close as the boy next door. Or maybe its, no one is beyond change. Better yet, it could be if you seriously want to kill people be smart about it. There’s a sense of irony and humor in all that by using shock and awe it seesm to work hand in hand with friendly and cordial. The most important aspect at the end of the day is that it all works well together and that’s what counts. Morbid: A love Story is a smart brooding experience! 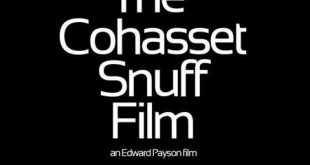