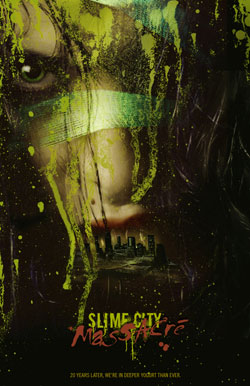 In the wake of a “dirty bomb” attack, a New York City neighborhood known as “Slime City” has been evacuated, except for the homeless (“displaced refugees”). Four squatters searching for food in the ruins of the Zachary Devon Soup Kitchen discover a supply of mysterious wine. When they drink the wine, they are transformed into hideous slime creatures driven to murder – an intermediate step as they are possessed by the spirits of cultists who committed suicide years earlier.

“Welcome (back) to the city where the slime never sleeps”. Has it only been about 22 years since the slime was unleashed on unsuspecting public mostly in the form of midnight movie showing? The original film has had a surprisingly long shelf life and has been released in many different ways and formats over the years. The last appearance is in Slime City Grindhouse Collection in 2009 in a package that includes Greg Lamberson’s other movies: Naked Fear, Undying Love and the mini-movie: Johnny Gruesome.

Lamberson has no intention in revising the world of Slime City, after all his hero Alex (Robert Sabin) had been possessed and was killed by his girlfriend (Mary Huner). The cultists were trying to rent the apartment to the detective on the case (Dick Biel) to start the story all over again. Seems like the story had run its course. But thanks to Slime City being part of the Beloit International Film Festival and the director and the two stars being treated well, seeds of an idea started growing in Lamberson’s head.

He would write a sequel that was a pre-sequel as well. Mary would get to return as Swan and Robert would play the cult leader Zachary who possessed his character in the first film.

Things came together, there was interest and everyone liked the script and the story it told.

Slime City Massacre is a much bigger movie than the original and brings back feelings of the Italian post apocalyptic movies of the ‘80s. The movie starts with a flashback to the soup kitchen of Zachary’s cult where he takes in a streetwalker named Nicole. The cult members are strange but very friendly and don’t come off as evil as they did in the first film. The film jumps to the present day where NYC is hit by a dirty bomb and most of the city becomes the slums of Slime City. The main characters are Alexa (Jennifer Bihl), Cory (Kealan Patrick Burke), Alice (Debbie Rochon) and Mason (Lee Perkins). As they try to survive in the hard Slime City they find Zachary’s old soup kitchen full of wine and yogurt. They start becoming possessed and then things get even crazier.

The acting is surprisingly good from the entire cast. Debbie Rochon is very strong as Alice; whose’s addiction gets the best of her. Her performance is always complex and works on different levels. I just wish she was in more of the movie. Mary Hunter Bogle returning as Swan commands her scenes with an intensity that seems like it has been growing over the years. You can believe that she has been killing the possessed for years. She kicks some serious brain. John Renna’s Mayor is a larger than life character out of a Charles Dicken’s tale and he makes the best use of his screen time.

Some of the visual effects reveal the movie’s low budget, but as most of the cheese is planned this time it is more a reminder of the movie’s roots. The slime monster characters makeup is all good and very colorful to say the least. Fans will be happy to know that brains do attack again, and body parts do open up to form mouths to chew on some unlucky victims.

It would not be fair to reveal all the effects so I will just say they will be enjoyed by gore/slime/splat stick fans. A lot happens in the movie in a short period of time but we never lose sight of the characters and their struggles. I wish all movies would remember that if the acting is good, it makes a better story. The movie has premiered at the same film festival( Beloit International Film Festival) that Slime Citywas shown at a few years ago. The slime has come full circle. When this one finishes the festival circuit and is released on DVD, it will be well worth your time to pick it up to enjoy over and over again. I give it 4 out of 5 stars.