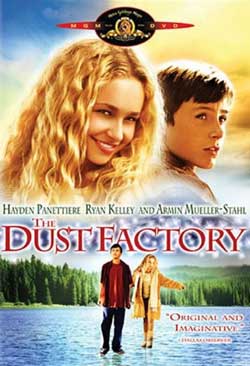 The Dust Factory is an adventure about the love and friendship between two teenagers who help each other through a difficult time in their lives.

After his dad Ryan senior’s death in a truck accident, schoolboy Ryan Flynn, a gentle, somewhat nerdy space-fan, becomes a recluse. He shuts up completely after a fall and near-drowning experience while roaming the countryside with his admirably patient, cheerful playmate Rocky Mazzelli. Only Ryan’s late granddad finds a magical way to get trough to him and introduce him to a mysterious place, the ‘dust factory’. There grandpa and resident teenager Melanie ‘Pan’ Lewis shows how youngsters prepare for their next life phase. But deciding when they are isn’t easy or safe.

There’s a few reasons why this seemingly kid-only film is worth a viewing. First it truly offers a rather original story with some off-the-cuff ideas placing it more into a cult-style film category more than anything. Secondly, it debuts one of Hayden Panettiere’s early roles that in itself explains why she had no problem ramping up in future years as a much publicized celebrity. Hayden Panettiere brings a healthy likeable dynamic in her role as Melanie Lewis that steals the show and provides a believable young romance scenario that is still PG appropriate for young viewers, Ryan Kelley the other main star of this film delivers a strong but lighter performance as Ryan Flynn. Armin Mueller-Stahl provides the older balance and wisdom needed in his role as Grandpa Randolph who pulls the whole she-bang together.

Now if you find carnival acts, jesters and odd showman nightmarish then maybe this lighthearted film will actually freak you out a bit. Its base is deeply rooted into the after life and the assumed purgatory state that the close to death might experience while seconds pass by. How this movie succeeds is taking that idea and giving it a unique twist per way of a carnival tent they refer to as the “dust factory”. Very simply, if you are caught in between worlds you can choose to trapeze and let go to return to your previous world. If you are ready to move on then grabbing hold will send you into the next life. This letting go act is signified by the act of falling and turning into dusk.

Melanie has been in this world for quite some time. Ryan, a new arrival is confused as he makes his way thru the new dreamlike environment. His grandfather, acts as a spirit guide who instills wisdom along the way. As the 2 young children explore this inner state, they form a bond that will follow them forward into reality. Though the inner world is full of mystique and subtle darkness as they encounter the ringleader who likes to pull them under per slimy oil tentacles. Ryan who in reality has been a mute for quite some time, rediscovers his voice very quickly in this new environment. As his body waits in a limbo state during an accidental falling, his mind has to make a chice as to which direction he will take. Ryan is at odds coming from a world where his father died early on and his grandmother had just passed away.

All in all, it’s a bit weird but works as a start to finish piece. It’s ending provides all the necessary closure t needs to leave the viewers with a simple smile and satisfaction of a well told story.

With a light rating of PG, this film is suitable for children in the same way that “Something Wicked This way Comes” provides. I enjoyed it the first time I saw it and still enjoy it upon second viewing. It deals with death in a suitable way that children can relate to but also provides a few adult driven thrills in its presentation.

I wish there were more films facts on this film, as there were a few things I would have loved to learn about the production. Grossing only $8,000, its opening weekend, I believe the film will have a stronger life cycle in its rentals and word of mouth referrals.

As they state in the movie “see you later….. not later just see ya”