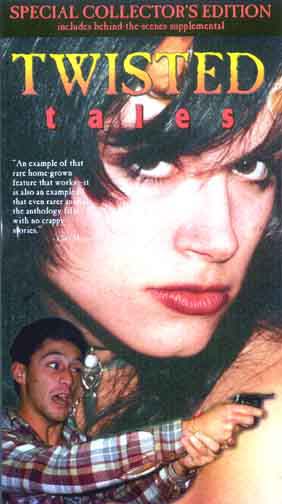 Far from the DARKSIDE, away from the ZONE, TWISTED TALES is a cut above the rest. In NOTHING BUT THE TRUTH Joey exaggerates everything-his way with women, his drinking stamina and his fighting prowess-to such an extent that his lies spring to life and come after him. That is, until he makes up a story big enough to kill him. THE SHOOTING: Tommy is in trouble-there’s a corpse in his apartment, a smoking gun in his hand, and the law is shortly behind. To top it off, his psychic girlfriend “sees” his every move and is helping the police. When he stumbles upon a fellow murderer he has a choice to make to kill or not to kill again. HUNGRY LIKE A BAT? Charlie explains to a psychiatrist that he has a desperate problem-he doesn’t want to kill his new, attractive next-door neighbor (Laura McLauchlin of ADDICTED TO MURDER), who he wants to put the bite on-which isn’t easy for someone who suffers from not one but TWO nasty nocturnal supernatural afflictions.

Twisted tales is a independent production from Brimstone Media. I tells the tales of 3 stories in a fun and horrific anthology. Much like the Tales from the crypt, tales from the Darkside and a few other anthology series, the film plays out 3 scenarios that all end in ironic twists and surprise fates. I’ve often said that a production doesn’t need to have all the bells and whistles as long as the story entertains. Twisted Tales is just that story. Each story flow nicely into the next and rounds out the film in a humorous climax. The actors are a talented bunch who deliver the lines with ease and emotion.

It is well written and ends each tale of clever notes. My favorite being the “Nothing but the truth” that may remind you of someone you know in your life, that constantly exaggerates to the pont of being unbelievable most of the time. Fate is served up well in this story as character Joey gets a dose of his own medicine. This tale is followed by 2 more dealing with psychics and supernatural afflictions.

Lindenmuth has an eye for visual story telling that doesn’t distract and keeps you engaged in where the tale is leading. He also has fun with it and seems to have a sense of focusing more on old school roots that we enjoyed as youths by introducing movie monsters when he can. Its independent filmmaking like this that is overshadowing higher production films that simply go nowhere and try and sell you on familiar faces. I would say if your looking for an anthology horror tale with some clever turns and humor to check this film out. Brimstone knows storytelling and does a bang up job at it! 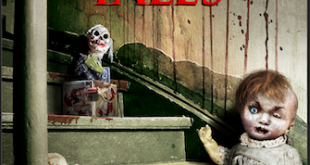