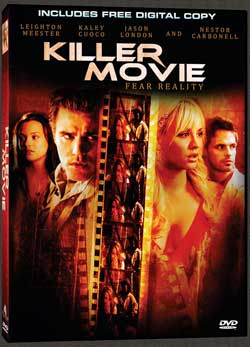 It’s lights, camera and very deadly action for reality-show director Jake Tanner (Paul Wesley), his starlet Blanca Champion (Kaley Cuoco) and the rest of the crew when they become stranded in an isolated Northern town where a killer is on the loose. As the gang starts dropping dead one by one, suspicions flair in this sexy, fun thrill ride, which also stars Gloria Votsis, Al Santos, Jason London and Leighton Meester (“Gossip Girl”).

Killer Movie a hybrid of sorts. While deeply rooted in the common themed 80’s style of slasher film plots and style of killings it still lives in the present with a reality show basis and modern day sensationalism.

Perhaps a plot layout is in order. The town is White Plains, N Dakota. A forgettable little midwestern town that seems to be the focus of a scheme by the networks to film a reality show based on the struggling or rise to fruition of the local sports team . Seems harmless enough and boring. Though to spice things up the agency has decided to let media star Bianca Champion use the shoot as a training ground for a movie role she is studying for. Bianca is our typical Paris Hilton / Lindsay Loham type character who lives in a Hollywood fed nonrealistic type of state. She provides a character role of modern day sensationalism that feels pretty familiar to which we are exposed to these days. The show starts with the off screen producer talking about the state of the industry that reality tv shows have saved the industry by presenting the “greater truth”. Even if they are scripted! I suppose this downright honesty is the real basis of the movie but somewhere in their is a slasher film as well.

Jake is the hired director who has taken the small gig as a favor to the studio to help build his career. He has some previous notoriety though has been pretty much out of work since, so reluctantly he takes the job to save face. Lee is the onsite bitch of the group who makes it pretty well know that she’s not one to mess with and likes to get things done. And then there is our cast of film team helps that sort of play in and out of the script. Meanwhile as they film this reality show, they also take turns doing on screen cameos about the making of the film, behind the scenes shots and well you get the drift.

Ok, so take all this down home fun and add a killer in the background who likes to prod though the film performing acts of kills that you’d expect from the Friday the 13th camp or some off version of “Cry Wolf”. This portion of the film has all the makings of classic slasher old school fair. The killer even spouts his own costume , a hooded covered mask and black jumpsuit. He also for some reason has a video camera mounted to his shoulder so he can capture some footage along the way. His goal seems to be to lurk in the background and take bodies out one by one while the filming of the show carries on. The producer of course hears word about this and tries to incorporate the killing into to the premise of the reality show. Of course any chance to cap in on some kind of controversy.

Now if I can mention a high point for me. The intro song “2 flies” by Benjamin Bates stuck in my mind long after the the film had passed. “2 flies in my eye, I don’t know how to get them out…” great stuff!… I may have to seek out a soundtrack just for that alone.

There’s quite alot of characters in this film, though maybe a bit too many as you tend to lose track of who is really important to the film your watching and who is just murder bait. Though somehow there is still a bit of intended camp in this presentation to elevate it beyond just another slasher film. All in all it keeps you entertained enough to enjoy what they are trying to do with this film. Don’t expect alot of innovation, though also you should feel right at home! I suspect that this filmed is geared towards that targeted age group rather than overall horror watchers, as many will roll there eyes a bit on the seen it- done it trains. Still a fine production with creeper sensibilities.