From the Nightshift: ‘House of Horrors’ – The movie

I recently had a chance to talk to Dan Monroe , the busy director/writer of the movie “House of Horrors”, which is currently in production in Buffalo, NY. One of the settings for the movie is the real House of Horrors which is one of Western New York’s Largest Haunted Houses.

They state they are:”Western New York’s Largest and Most Terrifying Haunted House 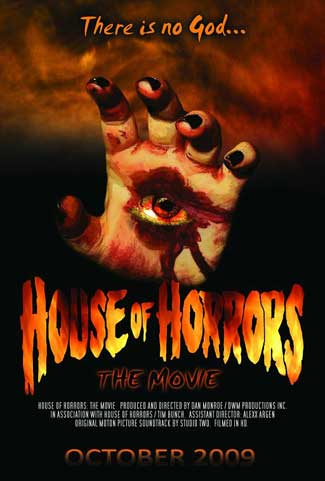 The House Of Horrors and Haunted Catacombs are almost twice the size as last year, and completely new. Over $150,000 was spent upgrading our haunts. Keep in Mind Just The House of Horrors alone is larger than most multi house events. All 3 haunts together are larger than all other haunted houses in Buffalo combined, giving you the best value for your money, and the biggest, scariest Haunted Attraction in the state!!”

What drew you to want to film a movie in the House of Horrors?

I have always had a keen interest in Horror movies… but primarily those with intelligent storylines and dark plots: ex- “The Exorcist”, “The Omen”, “John Carpenter’s Halloween”.

I spent the 2008 Halloween season as the official “Michael Myers” at the House of Horrors. While all the other workers are generally confined to one area, I had the leisure of “strolling through all the houses” scaring people.

One night it occurred to me that this place is a perfect place to shoot a Horror movie… the whole place being perfectly set up as one big movie set. I approached the owner and he was very excited about the concept. I immediately began planning the story and the entire project quickly began to take shape.

What makes this movie different from others set in a “haunted house?

GOOD question. Many things. First, most independent “horror movies” are greatly lacking in “story”. They figure “if we just get some killer guy and put in tons of blood we’ll have a hit”. This movie is thick in story with wonderful character development and plot twists. My goal is NOT to simply make a splatter flick… but to combine the shadowed horror of John Carpenter’s classic “Halloween” with the graphic nature of “Saw”.

Secondly, most all independent horror movies LOOK like independent movies… like something a fifth grader did with his Mom’s video camera. I have spent a small fortune to assure that this movie LOOKS like a Hollywood production. HD camera rigs, multiple 35mm lenses and DOF adapters, proper professional stage and set lighting, and 2 professional video and audio editing suites for final production. People watching this movie will hopefully say “Damn… what company made this…?”

The soundtrack: 90% orchestral / Hollywood style. There will be points where we use local bands for filler music and to promote local talent. 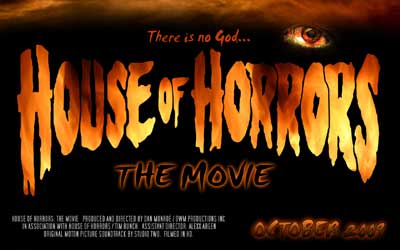 What other projects are you involved with?

I currently own a production company that provides entertainment to amusement parks, as well as doing professional audio recording, video and photography shoots as well as TV and radio commercials.

What else would you like to tell our audience about the movie?

Thank you Dan and I look forward to reporting more developments on the movie as I get them.