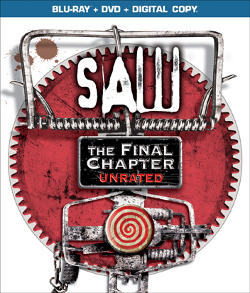 It is really hard for me to believe that I’ve been talking about, reporting on and watching SAW films for the last 7 years. The series as a whole has gone through many changes since the ground breaking original chapter. Some would argue that at the very least it is the grand daddy of the “torture p*rn” craze of the last 5 or so years other would add that is merely the wet dream of the “tweeners” who don’t know what real horror is.

One thing you can’t argue is that the films did make JIGSAW the most recognized horror icon of the last decade, actually possibly the only “new” horror icon of the past decade. Sure Freddy, Jason and Michael have been stalking around but as far as a fresh face on the scene, JIGSAW has pretty much been it. Others have tried. Films like BEHIND THE MASK and LAID TO REST and even HATCHET have presented the horror world with more than worthy iconic slashers but if you were to walk up to “joe public” and ask them who Leslie Vernon is they are going to stand there and stare at ya, you ask them who JIG SAW is and their eyes light up.

JIGSAW is an icon, deal with it.

This week brought us the home video release of SAW: THE FINAL CHAPTER which if our genre holds true to course will be far from the final word on this franchise. We can only hope that it is in fact THE FINAL CHAPTER but somehow I don’t think they’ll be putting our little bike riding buddy in the closet anytime soon.

SPOILERS AHEAD – If you continue, don’t come bitchin to me.

As with all the SAW films an attempt is made to tie this chapter into all the previous films and the film ends with the “shock – twist ending” that lets face it, hasn’t really worked well since the original. We all know it’s coming and I know I personally spent the mid part of this one figuring out which character would be the surprise master mind. It really isn’t hard to figure out if you pay attention. I won’t divulge so you can be “shocked”.

The only real reason to watch is the traps and this time writers Marcus Dunstan and Patrick Melton have outdone themselves with some really inventive and nasty little contraptions. These really are two sick twisted dudes, remind me never to make them mad. The traps play out great and the gore factor is stuck on high. The visual effects are first rate and the blood flows freely. No problems there.

The story line is I’m sorry – lame at best but lets be honest are we really expecting much here. The storyline plays out merely as a reason to go from trap to trap and watch people deal with horrible deranged situations. To that extent the film works. Problem I have with it is that I am just tired of the same old, same old. I really just don’t care anymore.

It’s hard to really fault the film because it delivers what it promises and certainly fulfills any expectations that a true fan of the film could expect but it just don’t stand out. The gimmick this time was the 3D aspect which just is not available to most of us on the home video front so what we end up with is “just another SAW film”.

I really do hope that they let JIGSAW end here but I fear years and years of direct to DVD trash, think CHILDREN OF THE CORN.

Special feature wise this disc is loaded to the gills with a seemingly endless list of goodies that includes a docu that recounts all the traps from all the films. Good stuff.

Hours of Jigsaw fun for everyone.

Overall I would say SAW: THE FINAL CHAPTER is an Ok film, not great, not horrible. Worth a view if you’ve followed the franchise and certainly worth a purchase if you have all the rest. The traps docu is probably worth the cost alone.

In case you’re wondering, they do leave it open for future installments, imagine my shock. GAME OVER! – I don’t think so.