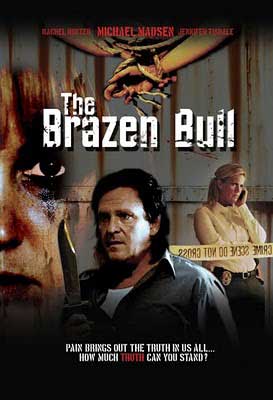 An ice cold tale of misguided ambition and savage revenge. Set in the bowels of an iconic derelict Los Angeles high-rise, we follow Lauren and her real-estate investing fiancé as they discover first hand what happens when a madman leads not with emotion, but rather chilling rationality. The Man in question brings a heaping helping of sanity and jet-black humor to the crazy table. The result is a wonderfully off-kilter horror/thriller that never goes where we expect, but rather draws the audience deeper into a surprising world that has dark corners even in the brightest rooms.

After watching “The Brazen Bull”, I threw up. I haven’t vomited in years and I just let it go. Was it the movie that made me so nauseous? I don’t think so, I have a bit of the flu though I think I can still make it through this review. “The Brazen Bull” is not a bad film, it doesn’t really offer up anything in the originality department, but it does give us a healthy dose of the psychotic Michael Madsen which, at least for me, well worth sitting through.

Lauren (Jennifer Tisdale) and her fiancé Tyler (David Frank Fletcher Jr.) spend their money by investing in condemned properties. One of which includes a rundown thirteen story building that was once used for commercial use and through some sort of zoning miracle, Tyler was able to get the building and plans to turn it into a state of the art residential apartment complex. Along with Lauren’s friend Ashley (Gwendolyn Garver) they embark into the old building to catalogue everything that needs to be updated in order to turn it in to their cash cow. What lies inside is something they could have never imagined and their lives are about to be cut short by The Man (Michael Madsen). Their only hope is Lauren’s mother Natasha (Rachel Hunter) who may have a dark secret of her own. 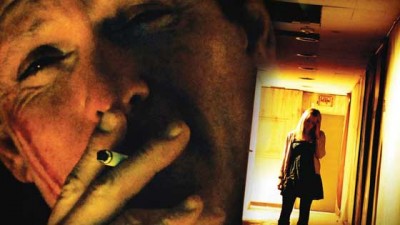 The films plot is ridiculous and boring. The (most) dialogue is ludicrous and people say things that no one else would ever say in any situation. It is almost a travesty that guys like Madsen are stuck in films like this and at the same time the only thing making it interesting. Madsen dons his best Mr. Blonde persona here and does plenty of torture and laughing. Not sure why, but when Madsen threatens you, you tend to believe him. That is what makes him so much fun to watch. At one point, after lobbing off a hand and cauterizing the wound with a blow torch, he tries to force feed his victim a piece of charred meat that he pulled from the stump. Because it was Madsen, the scene was quite memorable. Too bad the rest of the cast and their acting abilities leave much to be desired. The films lead, Jennifer Tisdale, has one of them voices that just screeches out and really grates on your nerves in this type of film. Other than Madsen, the only other bright spot in the film was Gwendolyn Garver (who also served as the film’s editor). Though she was saddled with the hipster best friend role, there was something in her performance that I enjoyed.

I did like the films setting in the old building and works in that respect. The pacing in the films first half was way off. There was too much walking around and pointless dialogue with nothing really interesting happening. In all honesty, the ending of the film was awful. A terrible decision and just plain stupid and it never worked for me. The middle forty minutes of the film work best while the rest fall flat. And that middle is mostly Madsen doing what he does best. The film’s title “The Brazen Bull” was the nickname Madsen’s character gives himself for ridiculous reasons and not the fact that the brazen bull was an execution device in ancient Greece. That would have been a nice reference, instead we are given one that really is silly. 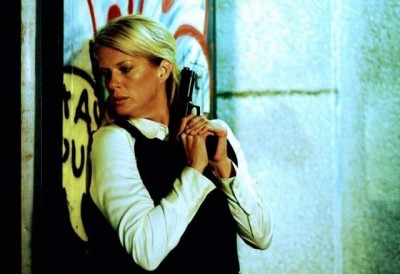 Director Douglas Elford-Argent does a commendable job though the film struggles with a weak opening and an even weaker ending that pretty much tarnishes what is good in the film, except for Michael Madsen. If you can’t tell, I am a devoted Madsen fan and ever since “Reservoir Dogs” I have spent many, many hours watching films and television shows that he has been featured in. Coming up for Madsen, the musical madness of “Eldorado in 3D” with David Carradine, Daryl Hannah, Bill Moseley, and Brigitte Nielson. 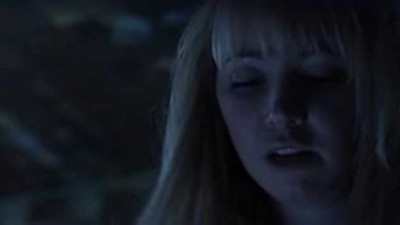 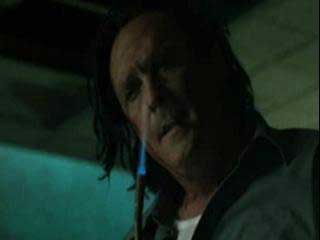