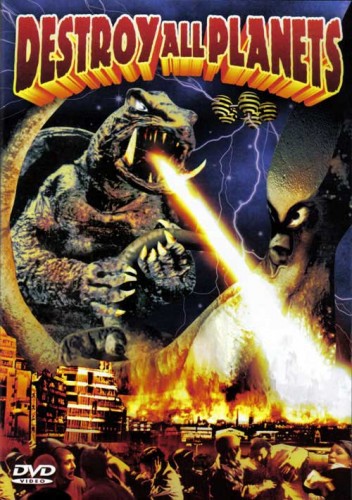 SYNOPSIS:
“A group of aliens from another planet head for Earth with the intentions of conquering it. Their first ship is destroyed in transit by the giant flying turtle Gamera. A second ship makes it to Earth and captures two Boy Scouts and holds them captive so that Gamera will not attack them. The aliens then implant a remote control device into the monster’s neck and use the great turtle to attack Tokyo. The boys then come up with a plan to foul up the remote control device to the point where Gamera does the opposite of what he is ordered to. As a result Gamera destroys the aliens ship, but then has to contend with their giant squid-like leader Viras.” (courtesy IMDB)

REVIEW:
Giant monsters trash cities in the 1968 classic ripped straight from the dripping bowels of Dai`ei Studios. Destroy All Planets (1968) – not to be confused with the similarly titled Destroy All Monsters (1968) – is typical Dai-Kaiju which, roughly translated, means Japanese-Stuntmen-In-Rubber-Suits-Stomp-Scale-Models-Of-Tokyo. 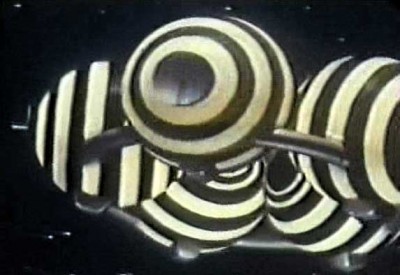 Earth is under attack from aliens wearing berets, like French mimes. Okay, so we’re being invaded by a bunch of cheese-eating street performers (except these ones don’t surrender so easily) who fly around in a spaceship that looks like giant bees in a scrum. Luckily for Earth, there exists a giant flying fire-breathing turtle named Gamera, who also hates performance art. Poor thing, he must get quite dizzy from all that spinning around, and if you’re wondering how he produces all that methane, he has four stomachs.

Now, you could be forgiven for thinking that giant monsters, or Dai-kaiju, in movies like this normally spend their time stomping Tokyo and fighting the Japanese army, but they actually spend a lot of time duking it out with other giant monsters and occasionally saving the Earth from alien invaders! I think it’s territorial instinct. But the aliens use a montagé ray to discover the big guy’s weakness: he likes little boys. A lot it seems. So the aliens use this to force Gamera into doing their bidding, which is…stomping Tokyo and fighting the Japanese army. Finally! The United Nations must like little boys too, because apparently Tokyo is expendable yet they’re unwilling to sacrifice the two tykes, preferring to give-in to our new alien overlords. If only Saddam Hussein had known it was this easy! 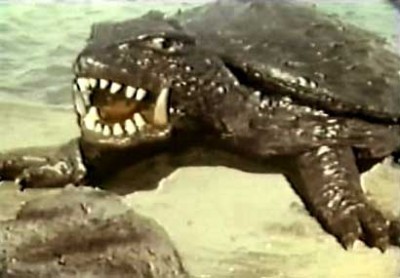 Director Noriahki Yuasa‘s first film for Dai`ei studios was the musical comedy Shiawasa Nara Teotatake (1964), or If You’re Happy Clap Your Hands. His next film was supposed to be Dai Gunju Nezura, or the Great Rat Swarm, but the decision to use real rats resulted in the studio being infested with fleas. Left with a styrofoam model of Tokyo and a rapidly recovering crew, studio boss Masaichi Nagata had an odd idea about destroying it with a gigantic flying turtle instead, which Yuasa, screenwriter Nisan Takahashi and a team of foam rubber craftsmen moulded into Gamera. Yuasa directed seven of the eight Gamera films, and reveled in their silliness. Even the title is silly: I didn’t see any planets destroyed, and only one was actually under threat. 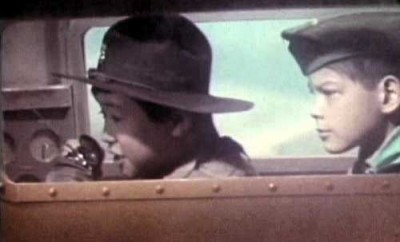 Yes, it’s cheaply made with poor acting, worse dubbing and terrible special effects. But it’s such a screwball movie so obviously intended for small children who don’t know any better that it’s a little difficult to dislike, even with the obviously time-filling flashbacks to the earlier films that take up almost a quarter of the running time. It seems Gamera alone has flattened Tokyo three times in the last three years, but true to Japanese industriousness it’s always rebuilt for next year’s attack. No wonder their apartments are so small! 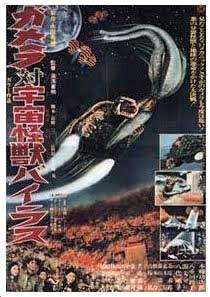 Destroy All Planets will make you say “Wow, I’m not even stoned!” which is always the hallmark of an enjoyably bad movie. Besides, any movie that has the line “Gamera, destroy Tokyo!” can’t be all bad now, can it? Anyway, please join me next week when I have the opportunity to burst your blood vessels with another terror-filled excursion to the dark side of Hollywood for…Horror News! Toodles! 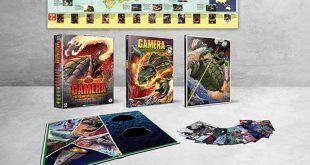 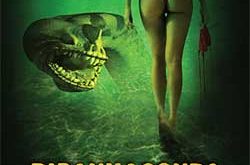