FACE YOUR DEEPEST FEARS
Nail-biting tension, indescribable terror and a primal fear of the unknown dominate the proceedings in Basement, the debut feature from writer-director Asham Kamboj and co-writer Ewen Glass and the latest addition to a refreshing new wave of British independent horror cinema.

Driving home from an anti-war protest, five demonstrators – Gary (Dyer), Sarah (Wareing), Saffron (Winstone), Derek (Mistry) and his girlfriend Pru (Beecham) – are forced to make a pit stop in the middle of the forest in order to answer nature’s call. Taking the opportunity to stretch their legs, the individuals wander off briefly with Gary, Sarah and Pru returning to the car to find Derek and Saffron missing. Their search for their companions leads them to a metal hatch leading down to a dank and dirty underground shelter. Believing Derek and Saffron must have gone down into it and somehow become lost or trapped, Gary convinces the others follow, despite Pru and Sarah’s reservations.

In the eerie darkness of the shelter, their worst fear becomes a reality when the hatch clanks shut above them, locked and leaving them no option but to walk deeper into the basement’s depths in search for another way out. Worse, in the shadows lurks an unseen terror that will soon have all five friends fighting for the lives unaware that one of their number knows much more about their circumstances than they are letting on.
Atmospheric, chilling and featuring solid performances all round, Basement marks director Asham Kamboj as an emerging talent well worth watching.

Basement (cert. 15) will be available in cinemas and on Sky Box Office, FilmFlex, iTunes, Playstation and LoveFilm from 20th August 2010, and on DVD from 23rd August 2010 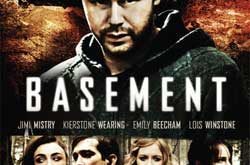