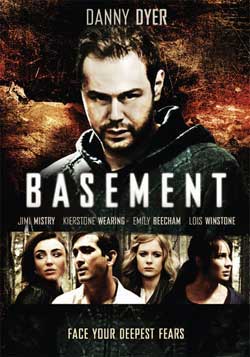 A group of anti-war protestors on a road trip stop off in the middle of the woods when one of them needs a bathroom break. The group soon ends up trapped in an underground structure and is unable to find a way out. Making matters worse is the fact that that there is something down there stalking them, and they discover too late that they have been selected to take part in a bizarre experiment. Will any of them survive to see the light of day ever again?

Before I watched “Basement” I did a little research on it as I had never heard of it didn’t know a whole lot about it. I thought that the premise sounded pretty intriguing and even though most of the reviews I read about it online were negative I went into it feeling pretty optimistic (normally I love the movies that most other people hate). Unfortunately it wasn’t so great and a lot of the comments that I had read about it on the Internet were pretty dead on. Watching “Basement” was not what I would call a positive experience and I was overwhelmed with happiness when it was finally over.

I think that the biggest problem with this film is that it is just so convoluted. For the biggest majority of the time I really didn’t know what was going on. I don’t think that it is unfair to call the entire film a huge confusing mess (I’m still not exactly sure what the point was of the opening scene). There are several distracting flashback scenes that don’t really add anything to the plot, and I just had a hard time in general following what was going on for over half of the movie.

The big “twist” is pretty lame and the revelation at the end is not that much of a pay off. I was expecting some amazing explanation as to why the people were put through the experiment but the answer we get is less than spectacular. The ending is more than a little underwhelming and in my opinion it isn’t worth sitting through the rest of the movie for it. If you do watch it all the way through don’t expect any kind of earth-shattering ending as it just doesn’t happen.

Another major flaw of the movie is the fact that it is just plain boring. Most of the movie is just the cast wandering around aimlessly (and arguing with each other almost non-stop) as they try to figure out what is going on and looking for a way to escape their underground prison. There is an unseen antagonist attacking them from time to time but even these scenes are pretty boring as well. I think this film suffers a serious lack of action and as a result I was tempted several times to either skip ahead to the next scene or just take the movie out of my DVD player before I even finished it.

Probably the only redeeming quality of “Basement” was the fact that the acting wasn’t that bad. A lot of people online bashed Danny Dyer (who plays Gary) unmercifully and I really don’t see why (come on guys, he isn’t anywhere as bad as Nicolas Cage or Matt Damon). I thought that he did an okay job for what he had to work with and really don’t get why the poor guy is so hated by most of the people on the Internet. I thought that Kierston Wareing was pretty good as Sarah and the other cast members did a just fine as well. I have seen a lot worse acting in other movies and really didn’t think that it was that bad in this film.

I just really didn’t care for “Basement.” I thought it was poorly written, there wasn’t enough going on to hold my attention, and in general it was just not a very good movie. Some people may enjoy it but it just wasn’t for me. If you are looking for a good flick about people trapped underground then I would suggest you check out the very underrated Thora Birch film “The Hole” as it is ten times better than this movie. While “Basement” wasn’t the worst film in the world I still have trouble recommending it to others. If it sounds interesting to you then by all means give it a go, but keep your expectations pretty low. 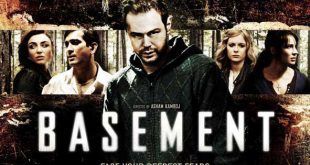