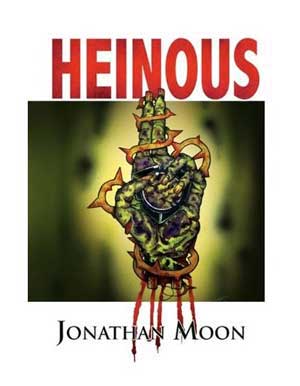 Are you tired of going to your local bookstore to find a great horror novel only to return home empty handed? Looking for a book that features excellent writing, graphic violence, and realistic characters that you actually care about? Want to read something that is entertaining, original, and actually frightening for a change? Then look no further than Jonathan Moon’s new novel, Heinous.

Heinous is about an ancient demon who takes possession of people and then forces them to go out and kill those who are nearest and dearest to that person. The story centers around Gavin, a likable high school student who has the misfortune of being the latest person to serve as a host for the vicious demon. Within moments of taking over Gavin’s body the demon (who Gavin takes to calling “Heinous”) makes him brutally murder his best friend Joshie and dump his body in the woods. (Did I say he brutally murders him? That’s not the word for it. I don’t want to give anything away here but let’s just say that poor little Joshie has one of the most painful deaths of any of Gavin’s victims).

From there things go from bad to worse for Gavin as his life begins to fall apart as he struggles to keep Heinous in check. You actually feel for Gavin as he tries to live a normal life while having a demon inside him who is trying to make him slaughter everyone he ever cared about. Gavin does everything humanly possible to keep from killing anyone (he kills birds, squirrels and other animals in order to satisfy the demon’s bloodlust) but he soon comes to the realization that he is fighting a battle he just can’t win. There comes a point that Gavin accepts what he has become and actually starts to enjoy killing people.

Heinous is not your run-of -the mill horror novel. Yes, the horror elements and graphic violence are there (we get various stabbings, a woman electrocuted in a bathtub with a radio, etc), but it also works as a demented coming-of-age story as well. The tone of the novel has a sadness about it (the fate of Gavin’s parents is quite heartbreaking), and the ending is disturbing and stays with you for days after you finish the book(don’t look for an upbeat, happy ending here, folks, it just doesn’t happen).

Moon’s writing style is something to behold. He is a very talented writer who has created realistic characters (and realistic dialogue) that jumps right off the page at you. I believe one of his biggest strengths as a writer is his ability to create such natural and realistic interactions between his characters. Want proof? Then just look at all the of the conversations between Gavin and Joshie and tell me that they don’t remind you of interactions that you’ve had with your friends. Moon does a better job at creating realistic dialogue than most mainstream, well-known writers in the business today, and many of them (I’m looking at you, Dean Koontz,) could learn something from him.

I can’t say enough good things about Heinous. I highly recommend that you check it out as it is one of the best horror books that I have read in a long time. I predict big things for Jonathan Moon and am looking forward to seeing his future projects. If his other works are as good as Heinous then he’s got one hell of a career ahead of him. You don’t have to take my word for it though, do yourself a favor and go get a copy of Heinous now so you can check it out and see how awesome it is for yourself. Trust me, you won’t be disappointed, and you can thank me later for making you aware of such a great book. 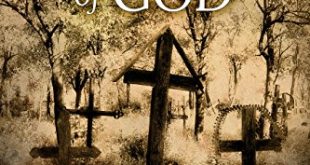