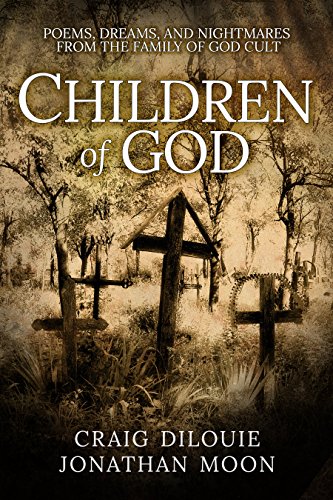 Children of God: Poems, Dreams, and Nightmares from The Family of God Cult

“Children of God” is the latest book by authors Craig DiLouie and Jonathan Moon. The book is subtitled “Poems, Dreams, and Nightmares from the family of the God Cult”. For readers this is no mere novel but rather a compassionate means to publish the works of the surviving members of a now defunct God cult.

Appropriately the book begins with an introduction into the definition of cults and religion before diving into the focal point of this book, the true story of the doomsday cult by the name of the “Family of God”. Founded by David Prince we are given the foundation points of how this cult came to be, what their purpose was, where they took residence and how they all came to the horrible crashing end that seems to be even more common these days among extreme cult groups.

As with most cults, they came together under the shared love for God and his intended purpose. Prince, an enigmatic individual himself rounded up this motley crew of believers who were easily influenced under the stress of hitting life’s rock bottom. In 2004, the group made way up to the Tehachapi mountains located in East California. As they formed their own church and assembled under a common cause, they began to anticipate the world’s end under Prince’s leadership.

Things quickly went downhill as the group moved into isolation falling quickly into bouts of delusion and self destruction combined with the demands and disciplines of the cult. Needless to say…it all ended badly in death and destruction leaving only a few survivors left to tell their tale.

“Children of God: Poems, Dreams, and Nightmares from The Family of God Cult” is a book of poems written by 11 of the remaining survivors who at the time of writing were all enrolled into a treatment program under the guidance of Dr. Salazar. The treatment came in a form of poetry-therapy designed to treat the patients thru healing and personal growth by using thoughts and poetry. The 11 were free to bare their souls and tell their tales thru this very specialized form of medium that mixes emotions, creativity, and personal release.

The book is the work produced by these former cult members during that time. Each poem is uniquely personal and insightful providing reading with a bare-your-soul base of what they endured and why.

Reading thru the various contributions provided, one thing was clear. The baggage carried forth was heavy leaving behind a mixture of love and hate subjected on them during the time of their stay. The book is divided into chapters that follow the various time periods before the cult’s tragic end. Each group of poems migrates into a different shared perspective as the months go by.

The poems begin on the note of despair, angst, and a renewed love for Christ (often referring to themselves as God’s children). This is the blissful beginning that begins their journey. Per the individual’s perspectives still trying to shake off their past, we are given the glimpse of reasoning that brought them closer to Jesus and allowing themselves to be led into a renewed existence. You might say this is the period of light and faith before their isolation evolved into corruption and abuse.

As they migrate into the mountains and take on an isolated existence, we learn of this “embracing” that occurs with them shouting to the heavens and praising Jesus glory.

Though a disappointment is felt as the poems move into new chapters wavering between belief and doubt. Some feeling confusion while others feeling that they simply were not worthy of Jesus and his promised ascension. They pray, they cry, they question the future, but still all persevere often assuming new roles within the organization divided into levels of service, protection and discipline.

August 17th, 2008 marks the apocalypse for the group. It is from here that things fall apart ending in death, torture, dismemberment and suffering marking the complete reversal of the group’s original intent. It is that tragic end that has become so familiar to cults of this nature. The poems echo the pain, remorse, and loss that occurred rounding out a journey into the light and progressing into a dark dismal end.

“Children of God” is a journey like none other that lives and breaths its progression of faith and destruction. It leaves a mark in words and emotions that signifies a period that most would like to forget. Those considering a cult driven life should consider this a recommended read in your decision making. 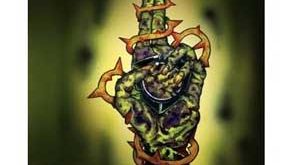