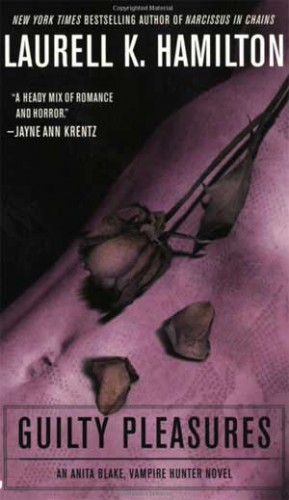 well I don’t know about you folks but I just adore the sh*t out of her books, I even have the comic book. Vampires have always been something I am interested in but Guilty Pleasures offers you a lot more than most tales of vampires. You aren’t just reading about vampires in her books but you’re also reading about were rats, magic, supernatural beings, raising zombies from the dead to testify in court, vampires going to custody hearings, and rights for foreigner creatures. Within the novel, “Guilty Pleasures” is the name of a vampire strip club operated by Jean-Claude, one of the main characters. Hamilton has continued the pattern of titling the novels after a location within each novel for most of the books in the series. Nikolaos, the vampire master of the city is a cute little vampire even though she is terribly old. I wish I could see her character again because I couldn’t get enough of her.

Slick, slightly greasy, but never dull the book really delivers. I am amazed of how many people I know that enjoy reading Hamilton’s books. I see it in someone’s house and freak out asking, “You like her books?” And it strikes up a long conversation. If you like Buffy you will enjoy these but it’s more hardcore than Buffy. More sex and violence. I actually heard that the following books of Guilty Pleasures get more and more about sex. Hamilton has graduated to nicely designed hardcovers since then, and they’ve jiggered the look of the paperbacks as well. The mass-market paperback originals are now available as first-edition hardcovers.

The new legal status of vampires means that they are subject to the laws of the land like anyone else but when vampires go bad they are super human strong and unstoppable. Vampires can not be kept in prison because they are uncontrollable, so once the vampire has been proven guilty it’s the death sentence for them. The vampires know this and it makes them not want to get caught. This is where Anita comes in. She has the natural advantage of being an animator which means that vampires can not easily bespell her with their eyes. She also has the advantages of guns, silver plated ammo and strong religious beliefs. In Anita’s world brandishing a cross at a vampire only works if you have religious faith in the cross. Interestingly crosses aren’t the only things that work against vampires, items from other religions work too as long as there is faith to back then up.

If you can put aside the issue of whether or not this society is believable, Guilty Pleasures is a reasonably enjoyable novel. Anita Blake is a raiser of zombies who works on the side tracking down and killing rogue vampires (although she never precisely defines what makes a rogue vampire). Starting at the top, Guilty Pleasures pits Blake against the millennial-old vampire master of St. Louis, Nikolaos. Along the way, Blake runs into a variety of the above mentions ghasties as well as the humans who love them.

All the characters are pretty neat. The head vampire being a creepy little girlish figure, Anita Black as the hardcore and sarcastic vampire Hunter. The novel also introduces Jean-Claude, and offers hints of some of his defining qualities, particularly his manipulative and strategic personality, his seductive charm, and his attraction to Anita. And Phillip the vampire junkie.

There’s a lot of romance in the air. Sex, sex, sex. If you see the art work in the copy I have, all of the characters are very sexy. The woman have amazon, hour-glass like bodies. The men have tone hard rock bodies, however Nikolaos is a small girl but her power and evilness makes up for that. The good news is that if you like this book there are plenty more books in the Anita Blake series to follow it. The bad news is that they are not all as good as this one.