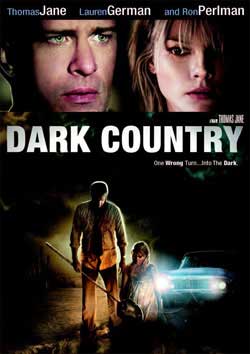 A couple en route from Las Vegas are forced to deal with a body out in the desert making their honeymoon one hellish ride.

Thomas Jane who you all might recognize from the film “The Punisher” has stepped up the plate to not only star but direct his new thriller feature titled “Dark Country”. Instantly without even getting into plot and premise the style and photographic care that went into this film is inspiring. Not quite 40’s and not quite modern either it has it’s own look and approach that enhances the visual aspect much like you might find within the pages of a graphic novel. This is even in in shots framed and contrasted just enough to be interesting and full of emotion thru use of clever lighting and perspective.

While the story itself carries with a heavy load of tension and destination the mood enhancements are the starring achievement to elevate this film visually way above the norm. I often found myself momentarily pulled away from the story to announce..wow what a great shot they got there.

Thomas Jane who plays the role of Richard (Dick) is on the eve of his honeymoon with recently eloped Nina played by Lauren German. Apparently a love at first site encounter lead to a impulse decision to get married in Vegas and setout on the road with a happily ever after notion. As we come upon the couple the night holds more than they ever imagined in the dark roads of the desolate desert. In an effort to beat the heat and travel by night there encounters begin with weirdness that only evolves into a surreal journey that seems to engulf them in the darkness and a mostly at night situation. Although we know they have stayed the course, the darkness seems to almost transport them into another world. This feeling is easily comparable to one entering into there own twilight zone of sorts.

As with any first encounter, there is more to the story than what is on the surface. Dick and Nina unravel this as time passes and engage in further conversations. The pressure of being lost. in the dark and seemingly on a road to nowhere begin to take toll upon there nerves which quickly turn the passion into confrontations. Though nothing like a even weird encounter to test the limits as they swerve their car to avoid a bloody man in the middle of the road.

This stranger who is without face is taken and placed in the back seat in an effort to get him to a hospital. Though when he awakens and starts asking questions that he couldn’t possibly know, it turns the suspicion meter up pretty high. Add to that the fact that his appearance is striking in the same way you’d see a victim out of the film “Hellraiser” appear. skinless, bruised and beaten. The plot only thickens as this unknown faceless man is connected with previous odd occurrences that escalate into violence gone bad.

This is of course when you expect David Lynch to walk onto to the set and pick up from here. Jane has no problem taking the helm into weirdsville and making it work. Lauren German is one hot lady lighting up the screen with pure sexuality and a flair for dramatic outbreaks. Emphasized against the moonlit lighting she is stunning as Nina.

Another interesting choice was that the writer chose till almost the 3rd act to disclose the names of the characters. Ron Pearlman makes an appearance as the local law enforcement. While that role seems to get typecast on him, he fits the profile rather well. The oddities just keep getting odder as the the events change, time gets displaced and all the while done under the cloak of a pitch black night. A unique film that feels dreamlike in quality. Thomas proves he had the goods to direct not only competently but artistically. Dynamic performances by Thomas Jane and Lauren German work like a charm even under the obviously cold weather conditions. Nice job!