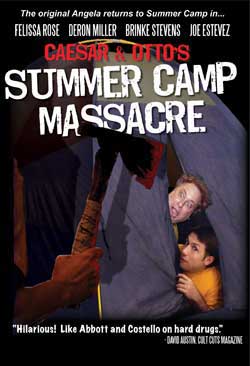 Caesar, an effete tough guy and his slovenly half brother, Otto, have signed up as summer camp counselors. But when the mysterious Carrie shows up, the other counselors start disappearing one by one

“Caesar and Otto’s Summer Camp Massacre” is a sequel of sorts to a five minute short by writer/director/star Dave Campfield, simply titled “Caesar and Otto”. The movie is flat out silly and that is a compliment. It’s been a really long time since I have seen a film where I wanted to roll my eyes but at the same time kept laughing at the performances that were intentionally over-the-top. There is a series of films just waiting to happen here and I for one will be looking forward to seeing them. Dave Campfield and his co-star Paul Chomicki have a great chemistry together and it shows on the screen. There is a lot of fun to be had here and can’t wait for more.

Caesar (Campfield) wants to be an actor, he tries at least. He is a bit of a tough guy with an effeminate nature to him. Otto (Chomicki) just wants to hang out and watch horror films while do what he is told by his lady friend Sashi (the legendary scream queen Brinke Stevens) who needs to be bailed out of jail….again. Caesar finds himself in a bit of trouble after attacking the mentally challenged (retarded if you are politically incorrect) brother of a police chief. Afraid of facing the consequences, they visit a job counselor (played by the incredibly over the top Joe Estevez) who leads them towards being camp counselors at Camp Sunsmile.

After the arrival of Carrie (Sleepaway Camp’s Felissa Rose), the other counselors become victims of a mysterious killer. Caesar and Otto, along with the help of their dad (Scott Aguilar), must find the killer and save themselves from being the next victims. Nothing in this film is meant to be taken seriously and it works for the best that way. Everything from the gore to the performances are silly and fun. The entire cast is fun to watch. Campfield and Chomicki have their schtick down pat and that helps them to carry the film.

Being that these characters were first introduced in a short, it was possible to ruin a good thing and thankfully it was avoided here. In fact, there seems to be plans for another sequel and that is what I was hoping to hear. It will be fun to see how these characters handle other situations and the types of films that they will pay homage/parody.

Several genre favorites appear including Joe Estevez who was actually Joe Estevez and Brinke Stevens were, at first impression, just there so their names could be put on the DVD cover, to an extent they were, but it becomes obvious as the movie progresses, they were enjoying themselves. I really haven’t kept track of Felissa Rose’s career since “Sleepaway Camp”, but here she plays a version of that character for laughs and fans of that film will enjoy her here. Another actor of note is Ken MacFarlane who plays the camps eccentric leader and is quite funny with his portrayal. Scott Aguilar has the charisma of a talented character actor and hope to see him show up again.

Not every joke works and the film isn’t perfect, but if something falls flat, there is always a quick follow up that does. The film looks like it was made for no money, the filmmakers knew that and embraced it which helps to add to the charm of the proceedings. There is plenty of red stuff getting tossed about and a couple of funny gross out gags. I hope to see the spirit of this film cross over and continue in to a sequel.

“Caesar and Otto’s Summer Camp Massacre” is a silly little movie made to entertain and it hits the spot. Some people may not find the schtick as entertaining as I did and that’s fine, they’re missing out. I will be watching out for Campfield’s next project as well as going back and watching his first feature “Dark Chamber”. A lot of fun is had here, a crazy mish mash Abbott and Costello and something from the Troma vault, this is something you should check out. I just wish I could be part of the fun.