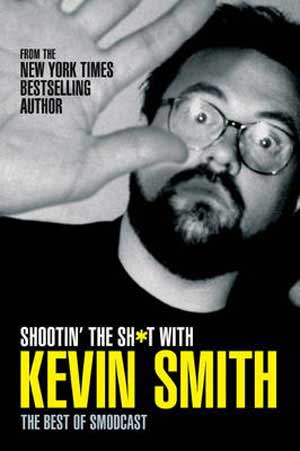 SMODCAST as it is explained, is a combo word fused from the conversation podcasts of filmmaker Kevin Smith and producer Scott Mosier. As it goes this hilarious radio show has been transcribed for readers to enjoy through this wonderful new release from Titan Books.

What makes this book so enjoyable is the banter and bizarre conversation that Kevin and Scott have together. Kevin talks about his late night walk with Alanis Morissette and the time when he thought they were gonna be mugged. The gay encounters and innuendos is hilarious as Kevin always seems to return to the common denominator of his penis, a blow job or jerking off.

While this is no gay book, the stories that entail are loaded with humor that takes it as far as conversations about the idea that if ejaculation was found to be a weight loss solution would the 2 guys engage in swallowing a dose in favor of the effects. Stuff as shocking as these load up the pages with beer banter and dude-isms that are just the material that makes fro a great comedy routine.

The book is laid out in short conversations that all come across almost like short stories. The subject matter is mostly lewd and probably more intense than you’d hear on your local radio station. Though with the glory of pod casting, the shows are not suppressed by FTC regulations, so in turn you get quite a load of racy materials, sex stories and freak encounters that are nothing short of whacked out thoughts in transition. I think the perspectives and views on life are what contribute to this great sit-down-with-coffee-book-and-chill novel.

Often laughing out load was common occurrence as I made my way thru episode after episode. There was a few moments that I admit to getting lost in the conversations, which maybe I wasn’t focused or just bored however there is still alot of great stuff here. One particular story involved the minds of chickens and if they talk after the sun goes down.

As Kevin goes on to infer…if the chickens talk, then what do they talk about? Escape, social chatter or the comparison of each others manhood. Further reading find Kevin plotting to either hook up cameras at night or dress in a chicken suit to observe the late night conversing. Other great stories come in the way of the film festival circuit and the mixture of accommodations. Or how about a few pages discussing wiping habits and the glory of wet wipes or dry rolls? Or maybe you prefer the great flea market excursion and the battle over small change and principle? Kevin and Scott basically say the things out load that we as a society tend to reframe from admitting.

I think you get the gist. Both of these guys bring up the weirdest subjects on the planet and exchange thoughts much like a line form one of Kevin’s own films. Perhaps it’s these sessions that inspire the dialog used in his scripts?/ I think folks will really enjoy the book for laughter, entertainment or just something to read that totally goes into left field most of the time. If I didn’t mention before Kevin Smith is the mastermind behind the films “Clerks”, “Mall rats”, Chasing amy” and well a whole catalog of great entertaining films. If you like the films, then you’ll like the read…. hands down. Fantastically absurd and thoughtfully unique!