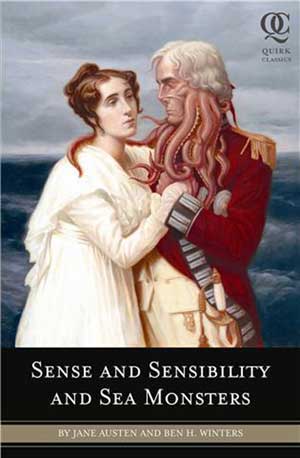 Remember the Jane Austen monster mash-up phenomenon known as Pride and Prejudice and Zombies? Well, the monsters have returned to wreak havoc in yet another Jane Austen mash-up. No, it’s not a sequel…or a prequel…to Pride and Prejudice and Zombies; they’re coming soon. This monster mash-up takes Jane Austen’s novel Sense and Sensibility and relocates it to the murky depths of the sea, with the appropriate title Sense and Sensibility and Sea Monsters. This novel again returns the reader to the Regency Era, this time following the Dashwood sisters through their trials and tribulations of love and loss, as well as their attempt to survive in a world where evil tentacled creatures rule the sea.

While the novel follows the basic plot of Austen’s Sense and Sensibility, the story takes place in an alternative universe account of Regency Era England. In this altered reality, an incident that comes to be known as the “Alteration” has turned the sea animals into vicious monsters that eat humans.

The novel begins by introducing the reader to the Dashwood family. The Dashwood’s were a very wealthy family that had been residing in Sussex long before the Alteration. The father, Henry, lived on the estate with his second wife and their three daughters- Elinor, Marianne, and Margaret. Mr. Dashwood was determined to discover the source of the Alteration and decided to journey out and do so. Sadly, he was fatally wounded by a shark during this excursion. With his death, his large estate is passed onto his son John (the child of his first wife), rather than his second wife and their daughters. Influenced by his conniving wife (and against his dead father’s wishes), John decides to evict his step mother and half sisters from the estate.

Mrs. Dashwood’s cousin invites her and her daughters to stay at Barton Cottage, which is located on an archipelago off the coast of Devonshire. Although Mrs. Dashwood is well aware of the risk of living in this area (Devonshire is known as having the greatest concentration of sea monsters in England), she accepts the offer and the four women relocate. With this move, comes a series of encounters with the monstrous creatures of the deep blue sea, as well as the problems these situations bring with it. Read the story to find out what happens to the Dashwood sisters!

This time around, the Jane Austen mash-up was done a little differently. Quirk was proud to note that with this new book came a new, “Austen to monster ratio,” of 60% Austen and 40% “additional monster chaos” (as opposed to Pride and Prejudice and Zombie’s 85% Austen/15% monster ratio). Even though this second project strays further away from the original text than the first one, this did not enhance the story line. While the encounters with the tentacled sea creatures are just as amusing as the zombie monsters of Pride and Prejudice and Zombies, I felt like Sense and Sensibility and Sea Monsters was lacking an overall originality factor. It essentially felt like I was reading Pride and Prejudice and Zombies, just plugging in a different type of monster this time around. Of course, this could be a result of Jane Austen’s original stories more so than their rehashes. Both Pride and Prejudice and Sense and Sensibility are undoubtedly close in nature concerning their basic story lines: both are love stories set in the Regency Era consisting of women who must fight to overcome their financial, and hence social, situation.

A fun part of Pride and Prejudice and Zombies that I was happy to see carried over to Sense and Sensibility and Sea Monsters were the illustrations. These drawings definitely help in conveying the overall silliness of the storyline. This time around, though, the drawings were much more cartoonish, rather than sticking to the sketch look of the original illustrations.

This was disappointing to me, as the cartoon drawings made me feel like I was reading a children’s book at times, rather than an absurd alternate universe rendition of a literary classic.

Overall, the book was a fun read, and the passages were just as bizarre. If you enjoyed Pride and Prejudice and Zombies, you are sure to enjoy Sense and Sensibility and Sea Monsters. One passage that I enjoyed was when Mrs. Dashwood and Edward were thrown into the sea after a “tuna the size of a man” slammed into the dock they were on. The passage continues, “Mrs. Dashwood, not ready to join her husband in Heaven, nor in the stomach of an ocean-dwelling monstrosity, managed to recover from her décolletage a long sewing needle, razor sharp, which she had secreted there after sewing a replacement stitch in Marianne’s party gown that morning. Just as the tuna’s sickening mouth was about to close around her forehead, she withdrew the needle and drove it into the palette of the beast” (pg. 103). What a ladylike, yet horrid way of killing a beast!

There has been a backlash from hardcore Jane Austen fans, exclaiming that her work is being corrupted by these mash-ups. I do not necessarily agree with this declaration. I think these mash-ups are bringing Austen’s stories to a new group and generation of readers, who might not have otherwise read the originals. Regardless, the book is still an enjoyable and worthwhile read, Austen fan and non-fan alike. Let’s hope Jane Austen is not rolling in her grave, but rather, laughing hysterically! 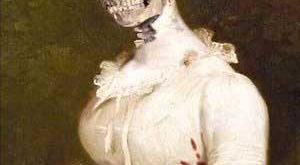