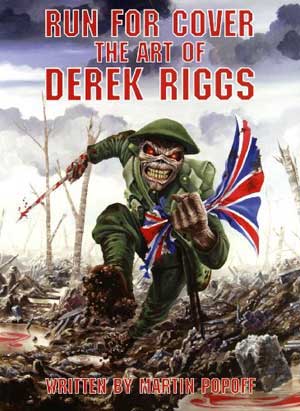 “Run for Cover: The Art of Derek Riggs” is an amazing book by one of the most recognized cover artists to emerge. Looking thru the book, can’t be accomplished without flashbacking to a time when heavy metal was in full swing and at its forefront the legendary band Iron Maiden. Why this is so important is due to a significant part of Derek’s illustration career being dedicated to being the exclusive illustrator for Iron Maiden’s products.

After working his way thru freelancing, he began to approach record companies when there wasn’t alot of illustration being shopped around. This fate brought his art to the attention of the labels responsible for Iron maiden first release. This first release would not only catapult Derek’s career but would jump off the shelves with an iconic zombie mascot image that was coined “Eddie”. The image was a stroke of luck as it hit the right time for buyers to come into new releases based on the cover art presentation.

Eddie was the one that couldn’t be ignored. From his early conception to his eye catching “Killers” cover image, this was the voice of a rebellious generation who sought out cool t-shirts to signify their individuality.

Lucky as well that the band Iron Maiden could back up the advertising and imagery they projected making it a complete package. The book is very well an “Iron Maiden” cover book as well as a portfolio of Derek’s work. For when the buzz caught on, he was enlisted to create exclusively for the band and at a rather fast turnaround rate.

The story within is extensive of those days past and the need for a constant flow of illustration work. It’s not surprising as fans would buy and rave about albums just based on the strength of the cover art. Then the music followed. While the book does feature some of his other work and a few other cover projects he took along the way, it’s the Eddie image placed into a multitude of scenarios that speak the most to viewers.

This is great art book that is not only a fine illustration collection but also a very iconic piece that captures a decade of heavy metal music. Fans will enjoy the numerous illustrations included in addition to a few that were never used or hard to find. Derek narrates all along the way giving us the full spectrum of adventures and details that encompassed the Iron Maiden days. You might even find yourself comparing between your most favorite and the most recognized of his pieces. It was hard not to ignore with just about every adolescent’s bedroom adorning their walls with his art and a closet full of Maiden t-shirts.

The legacy here is that while Iron Maiden continues to create new releases, there will always be an “Eddie”. For Journey is was the bug, for Zeppelin it was the blimp.

Derek showcases some change in directions along the way featuring many unseen compositions. The book is a fine printed piece of work chalking in 180 page of color imagery and storytelling.

To add to the attraction, the brunt of the work are horror based pieces that will satisfy fan-boys and zombie lovers. It is often asked which images are the most noted in zombie genre circles. Without a doubt ….whether you call them zombies or not it would have to go to the long lasting Eddie illustrations. Highly recommended and a great illustration book! 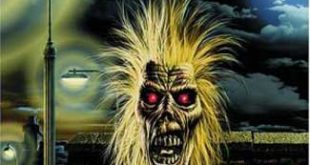