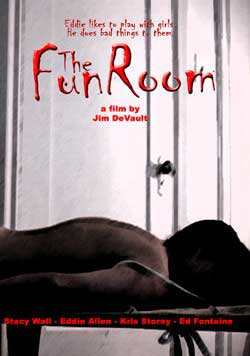 Eddie Roberts saw something horrible as a child: the torture murder of a woman. Now as an adult, the experience has led to his torturing and murdering young women.

We’re in a day and age where everything under the sun has been done. It’s because of that, that you can also recognize the true horror fan filmmakers from the ones who are just testing the waters. “The Fun Room” may be a micro budget release that doesn’t have the advantage of big budget seasoning, however it also originates from a team whom I could easily tell have been horror film lovers for quite some time.

And with the old influences comes the new and vice versa. “The Fun Room” plays with some old themes of re-visiting adults who comes from troubled pasts with the visceral nature of torture extremes that push the limits of creativity. “The Fun Room” manages to succeed in that sense successfully without resorting to having to show us every little bit of that idea. In other words, we know what going on, what’s coming and the acts themselves work by partial reveal and partial perspective left to the viewers imagination.

The movie has the now-adult version of a traumatized child returning to his home town and house to inflict some pain among those unlucky to cross his path. In essence, the victims don’t really have a legitimate reason for being subjected other than the choices made my one sick minded individual.Eddie is that very person who plays a bit with the idea of “good ol take em back to his house” for some vindictive torture-play. Perhaps there is a loss of substance and reasoning but I got that they just wanted to show some extreme depravity in the character Eddie Roberts.

In the background, Heather’s husband and the local detectives are working their way down the  neighborhoods trying to locate Heather and figure out where the killer is taking his victims. Meanwhile, Eddie kidnaps unexpecting victims, brings them back for torture and does so in front of Heather to torture her “through” exposure to the acts. Oh, ya Eddie has a crush on Heather and doesn’t take her rejection very well.

It’s all pretty convoluted if you think about it. Eddie is a damaged trauma survivor, we get that and he has grown up to be a psychopath. Beyond on that and his need to impress Heather, the film doesn’t have alot of meat to it to justify a full feature.

Problems I had with the production were not that it was a micro budget film. The volume levels were all over the place making it hard to just sit and watch without a remote in hand. Screams were extremely loud to the point of distortion, and the main character Eddie was talking in a whisper tone thru most of it. To make this ready for prime time, there needs to be a leveling out of volumes first. The other issue I had, was that the actor playing Eddie Roberts (Kristopher Bryon Storey) was just a inappropriate match for the “type” of character he was playing. Storey being more mild mannered, easy going…. almost to a relaxed at ease persona just didn’t make me believe he was a sick twisted killer that would shove hot lights into girls crotches and shove a pole up her other end. The substance of the film seems to be rooted in a “what’s he gonna do next” imagination of torture scenarios that really is the coming attraction of this feature. As disturbing as the kills and actions are, they feel a bit used up in this current environment of extreme kill filmmaking. Though in my own perspective, I was glad to see a little invention in this area than taking the redundant tired route of derived copy-cat torture sessions.

Stacy Wall who played the main role of Heather was a highlight to the film who gave am much more engaged emotional range to her bright, to playful, to suffered character.

The film is directed and written by Jim DeVault who has an impressive list of horror short films he has contributed to the genre.

In summary, there isn’t alot of premise or character reasoning to make this a “have to see”, though extreme horror film viewers might go for the torture rooted stuff to add to the list of nasty films you’ve seen in the last year.