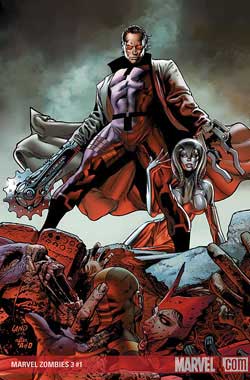 This time they are invading the Marvel Universe! That’s right, the next chapter of the Marvel Zombies saga is a non-stop in-continuity festival of gore. When the super-undead stumble into the Marvel Universe from the Man-Thing’s mythology, all of Florida is quarantined against the impending zombie plague. Time is quickly running out for a cure, so the Initiative sends a most unlikely group of heroes into the Zombieverse on a desperate mission to find the one item they need before the whole Marvel Zombies becomes dinner!

“It started with a flash in the sky, the arc of a rocket ripping through the heavens. When it fell to earth…” This run of comics from the leader in today’s comic book market was becoming tired fast the last time around. Nothing against Robert Kirkman, the writer who began the publishing phenomenon, but, “how long can you whip a horse before it bucks?” Their work is truly cut out for the new creative team. The new scream team of Fred Van Lente (“Incredible Hercules”) and Kev Walker (“Annihilation: Nova”) unite for a Marvel Zombies story like you’ve never seen before! Working on “Marvel Zombies 3” is a cash-cow. Can you blame them for accepting this assignment?

The new initiative team of “The Aquarian”, The Conquistador”, Jennifer Kale” and “Siege” move into Florida to investigate the report of hostiles in the Citrus state. They run into trouble from the git-go. Zombified bad guy, “Deadpool” lead a group of nasties against this new initiative team.

In issue #1 we get the obligatory killings of those not infected by the virus. “Morbius The Living Vampire” the leader of A.R.M.O.R. (Alternate Reality Monitoring and Operational Response Agency) is trying to help come up with a cure for the spreading virus. Time is running out, soon the world will be completely overrun by cannibalistic undead superhumans.

As the subplot plays out in issue #1 we see “Morbius” has plans of his own, as he tells us “…and everything id going exactly as planned!”

Issue #1 of “Marvel Zombies 3” shows potential after the way second series ended with not much really taking place accept a set-up for another series. Fingers crossed on this mini series. 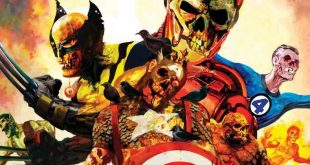 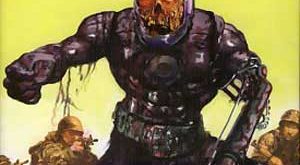