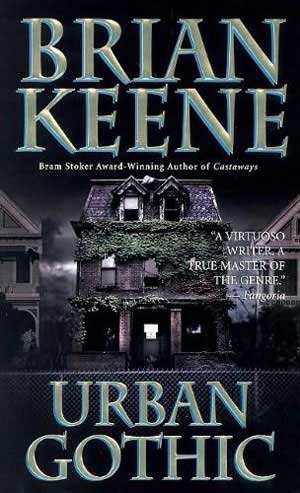 In his latest novel URBAN GOTHIC author Brian Keene steers away from the familiar territory of backwoods PA that have graced his last few novels and instead takes us into the cold heart of the city where once again horrible and dark things are at play.

URBAN GOTHIC tells the tale of a group of kids heading home from a rap concert in downtown Philly. A few wrong turns and the usual male not stopping to ask the directions later and our group of young friends find themselves on a darkened street in a part of the city where their parents probably wished they wouldn’t be. The car breaks down and of course along come a band of wandering street thugs. Racial tensions mount, some things get said and before you know it our clan of out of place music lovers are on the run from the gang of street wanderers. Not far away they see an obviously abandoned house and high tail it to the darkened hiding place. As they approach the house they notice that their pursuers stop a good distance away and begin yelling at them. In no mood to be beaten beyond recognition they break into the house and then all hell breaks loose.

The place isn’t abandoned at all. Far from it. What dwell inside are more terrifying then anyone could imagine and escape seems impossible.

On the surface URBAN GOTHIC play out pretty much like any urban ghost / monster story but woven deeper beneath the surface KEENE comments on urban blight, race relations and how humans as a breed have just pretty forgotten how to care about one another. Case in point, those street thugs that chase our young hip hoppers to their doom, they weren’t stopping to beat them up they were stopping to see if maybe they could help get their car going for them. We don’t find that out till a little later in the book but when you do find it out even as the reader you feel ashamed of yourself for just assuming that a group of young African American’s out on a city street must obviously be out to kill some white folk.

As the story unfolds we are treated to unspeakable horrors and in that fashion that only BRIAN KEENE can muster the blood flows and the body count mounts.

I often find myself with this problem when reviewing a KEENE novel as I really want to spill the beans on just what the hell is going on inside that house but I can’t do it. You have to discover it for yourself but let me just say this, what lives inside the house is hideous beyond belief and the things that get done to our young victims is some of the most depraved and shocking moments of vileness that this reviewer has read in a while. KEENE has that ability to not just open doors that shouldn’t be opened he kicks them in and then throws the door in the shredder just to make sure you can’t put it back in place. Brian’s writing has always been very cinematic and rich and URBAN GOTHIC is no different. This one begs to be a feature film, don’t be surprised if we are reporting on it soon.

Brian always amazes me with his ability to so completely and effectively build solid likeable characters in the span of just a few pages and in some instances just a few paragraphs. It truly is a gift that only the very select few possess but I am sure damn excited that he has that ability and has chosen to share it with the horror community.

URBAN GOTHIC is summer reading at its best, its horror writing at its best and is once again a shining example of the fact that BRAIN KEENE is the premiere writer of horror right now.

Run out and pick URBAN GOTHIC up as soon as you can.