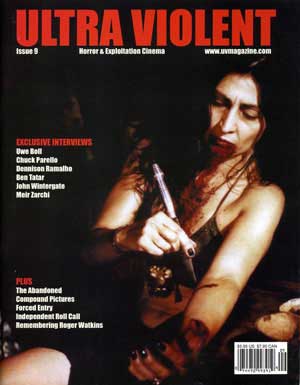 Issue #9 comes loaded with all kinds of underground goodness!

Ben Tatar talks about his days with Eva Gardner and his numerous dubbing roles in films. Strangely enough several of his appearances have been cut out or deleted which all makes for an interesting tale of his life in film, Spain and life among the elites.

Andy and Luke Campbell are 2 film-makers to keep your eye on. While I confess to being unfamiliar with their work, I have been told in the past that their release of “Red Skulls” was one to check out. Low budget filmmaking that still seems to meet the demands of viewer interest. A fascinating story about their rise from childhood filming to now that seems to have brought them a long way with some interesting products out of the journey.

Uwe Boll is in the news again. This was one I had to check out. While I don’t really share the contempt that other reviewers share on his products, I will agree his collection has been hit or miss. Though most importantly lately a hit with films like “Postal” and “BloodRayne” and “Seed”. I really enjoyed the sort of a walk-through-his-ordeals article that brings alot of the previous issues finally into perspective. With a strong conviction, and a work your way up and make it work attitude he has probably moved alot further than most would ever hope to come. The article is both insightful and a great overview of several of his films. One of the highlights for me in this issue.

Nacho Cerda, quite an interesting talent gives us a profile and history of his films which include the more popular “the Abandoned” which he refers to as his “feature length nightmare”. Nacho gives us quite an overview of the deeper meaning behind the film and its vision. Nacho also comments on the actors and the hectic production arrangements. Though my real introduction to his work was his extremely disturbing “Aftermath” DVD. Which is a must see for several reasons…. let alone it’s content.

“I Spit on your Grave” is easily one of the most memorable early shock films to come out of cinema. Meir Zarchi, director of the piece has provided a really impressive and lengthy interview on the film and his works. In fact one of the longest I’ve seen on him. Fans of the genre and movie wont want to miss this one. Zarchi covers a bit of everything. his upbringing, his early film career, the events leading to writing “I Spit on your Grave” (Day of the Woman) and the atmosphere on the set when they did film it. Quite a tasty bit of important film history and coverage on the controversial and infamous film.

The film “Forced Entry” is profiled and quite frankly, I jotted it down after reading as a one to see and own for that matter. Featured on the inside cover it looks like that will be alot easier than tracking down an old bootleg.

Independent roll Call was easily a “read-every-sentence” feature I got into. With so many titles on the market it’s hard to track down which of the micro budgets films are the ones to seek. This short but thorough section of the mag was more than helpful as it reveals quite a few titles and the filmakers. The end review column of the mag once again reveals a few familiars but also alot of cutting edge stuff that tend to fly under the radar. 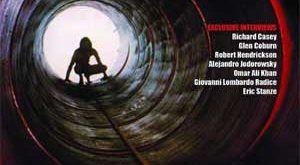 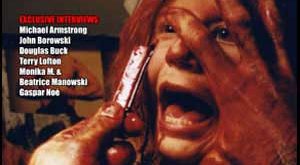