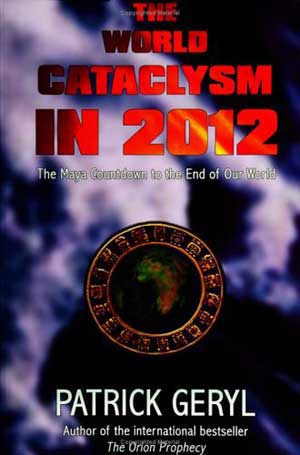 THE WORLD CATACLYSM IN 2012: THE MAYA COUNTDOWN TO THE END OF OUR WORLD
Written by Patrick Geryl
Published by Adventures Unlimited Press
Publication Date: 2005
Format: B&W – 345 Pages
Price: $16.95

While the level of 2012 books seems to vary on the market today, each seems to somehow offer its own perspective. Sure the common factors such as solar flares, talks of Mayan warnings, earthquakes tidle waves and various world end scenarios are well traversed and revisited …..however it’s the conviction of the author that differs in level of depth and understanding. The simple fact I got from this version is that author Patrick Geryl is one scary guy. Why do I say this? Because he believes without a shadow of a doubt that its all gonna come tumbling down in 2 years.

He backs up this conviction with a steady purpose which is to unlock the secrets and reveal what the ancients already knew. His obsession with an underground labyrinth existing beneath the pyramids of Egypt lost from civilizations long ago is intriguing. Though the root of this obsession is not so much the grandeur architecture that lies hidden below but the secrets carved and preserved that reveal foretelling of a modern cataclysm within our time.

His travels over the world are explained for the sole reasons of unlocking codes, breaking numerical equations and putting them all together in a prophetic call to humanity. Often you can hear in his voice a desperation that says pay attention, listen to what I say…theres nothing that can be done but don’t ignore it either. Readers will both enjoy and question his take on modern scientists. Often he proclaims that no one is paying attention an that the current crop of scientific minds are ignorant to the data about the upcoming events. Further more the idea of sun spots, solar flares, a break in the magnetic field and the axis shift are revisited often.

Though I will say its impressive as Patrick just doesn’t preach and leave it at that, he provides the equations and numerology that helped him determine his line of thinking. It was too much for my non mathematical mind to consume, but educated readers with a sense of number crunching might take advantage of the work that Patrick has done for them. One of his great achievements is cracking the “Dresdon Codex” which is explained in the book. Patrick. as he states has spent several years decoding these ancient clues for the good of what’s to come. To be honest, I really “hope” they are wrong as the alternative is destructive. By the time the last chapters came around I had to stop reading for awhile. Mainly because they are devoted to the equations. For one who hates math like myself, these pages were more like watching grass grow.

Hauntingly enough several of the Maya stones pictures are blatantly a statement of things to come. I think the real question becomes, do we trust them enough to think they could predict our future.

Wow, with that kind of rude awakening it does plant the seed of what if. And while I read these books with a open mind I cant help but resort to my comfort zone that says all will be well. Well, the facts are presented and need to be understood. Author Patrick Geryl many times gets away from this notion as your eyes glaze over in theoretical equations that while are explained still are out of reach for many readers who haven’t lived within these walls of understanding. He speaks of excavations that he hopes to achieve and studies that still lie ahead. Perhaps his next book will be just those pieces that he’s seeking for completion.