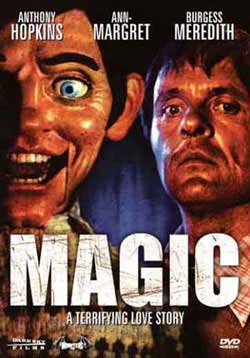 Acclaimed director Richard Attenborough helms this unconventional horror-thriller that reveals Anthony Hopkins’s penchant for creepiness years before his Oscar-winning turn as Dr. Hannibal Lecter. After bombing in his first solo performance, a magician’s assistant (Hopkins) holes up with a ventriloquist’s dummy named Fats and eventually hones his act into something spectacular. But when Fats starts talking back, his master’s at his mercy.

First of all, I need to get this out of the way; casting the regal Anthony Hopkins as a presumably Jewish Magician named Corky who grew up in the Catskills is just weird. With that out of the way, an A list star with an A list director make the movie, Magic, a true gem. Most members of my generation probably recognize the director of Magic, Richard Attenborough, as the old guy from Jurassic Park and not the Academy Award winning director of Gandhi, but he is an incredibly talented director. This film is by no means a mark on his resume’. Hopkins and Attenborough crafted a truly frightening film that delves into a broken human mind.

The film opens with Corky regaling his mentor, Merlin, about his first ever attempt at performing magic in front of an audience solo. Corky bombed and not only bombed, but is afraid to admit the fact, and lies through his teeth about it to Merlin. His mentor, however, is aware of Corky’s limitations, and helps him to realize that he lacks the confidence and charisma to be a great performer. Corky needs a hook, an edge to bring out his confidence.

Fast forward a year later where Corky is selling out a packed house. His agent Ben Greene, played beautifully by Burgess Meredith, brings a big time network exec to his show. The executive is skeptical about a magic act, especially as Corky stumbles from the beginning. Soon we learn that the stumbles are all part of the act to bring up Fats, Corky’s ventriliquist dummy and magicians assistant. Fats and Corky have that special kind of dirty ventriloquist act with Fats supplying the business end of the act. Corky’s career is now on the fast track and he is soon asked to star in his own television special. The problems arise when Corky refuses to take part in a medical exam. Here we see Corky’s acknowledgment of his poor mental health. Fleeing from his agent’s possible discovery of his mental state, Corky plans to revisit his hometown back in the Catskills. Following his literal drive down memory lane, Corky arrives at an old house where he rents a room.

At this house he starts a romance with his high school crush Peggy Snow (Ann Margaret). He starts a relationship with Peggy, but we gradually see him slip further into his dual personality. Corky’s agent shows up at his remote cabin and catches Corky in a conversation with Fats and immediately knows why Corky refuses to take a medical exam. The scene that follows is completely gripping as Ben challenges to Corky to go five minutes without Fats speaking. This proves to be an insurmountable task for Corky as he asks every thirty seconds how long it’s been. Not wanting to be put away and separated from Fats, Corky kills his mentor and friend using Fats as a bludgeoning weapon. The insanity only continues from this point and Corky and Fats’s bond grows more unstable. The audience now has no way to know how the relationship within this man’s mind will turn.

The fantastic thing that separates Magic from other films in the killer doll/dummy subgenre is it that it is very clear from the beginning that this is a story about a man with an extremely devastating case of schizophrenia. There are never any suggestions that Fats possesses any life of his own outside of Anthony Hopkin’s manipulations of the dummy by means of a hand in Fats’s back. You get the feeling that Corky wants to disengage from his relationship and reliance on Fats, and Corky is a fully sympathetic character. We all make adjustments with ourselves to make up for our shortcomings. As Corky lacks charisma and confidence, so his mind creates a separate personality that compensated for his shortcomings.

One of the amazing things about Hopkin’s performance in this film is that all of the ventriloquism is done by Hopkin’s on camera. I really think this shows the level of commitment Hopkin’s is willing to bring to a role, even a genre picture.

I also want to praise Burgess Meredith in the role of Ben Greene. Burgess Meredith has that instantly recognizable voice which can bring out the best in so many characters, whether a street smart agent or gruff boxing trainer. Overall Magic is a fantastic film that explores a serious mental disorder with disturbing effect, while resisting the temptation to undercut its seriousness by confusing the disorder with even a hint of the supernatural, or by trying to confound the audience by using it as merely a plot twist.