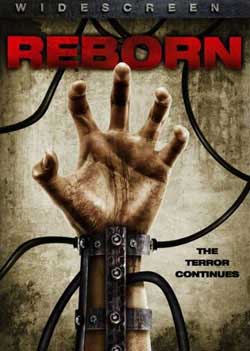 When a newlywed couple buys a foreclosed house in the Arizona desert, they think they’ve found their dream home. But this is no ordinary house: It was once the site of gruesome murders by the half-machine serial killer Motorman Dan. Too late, they learn that Motorman’s bloody rampage is far from over.

Superhuman warriors have always been an ideal experiment in Sci-fi genre, taking the normal human and making use of machinery to make them all powerful. In Craig McMahon’s Machined Reborn, a newlywed couple falls victim to this form of experimentation, and experience a complete change of lives.

Cade(Jimmy Flowers) and Jess(Davina Joy) are a young couple that show all signs of happiness between each other. Cade leads a blindfolded Jess to their new home, a trailer surrounded by a junkyard. Jess is surprisingly tolerant to Cade’s decision to sell their old place and use all their money to buy a junkyard. What Jess and Cade fail to realize is their every move is being viewed by an overweight voyeur, Motorman Dan(David C. Hayes.) Motorman Dan has a nervous twitch, and is shown in a small room with televisions that display various scenes in the junkyad. When Jess and Cade are in their trailer, Jess continues to hear noises and makes Cade search outside. Cade’s arm becomes pinned under the trailer, and Jess uses a jack to rescue him.

While Cade is in the hospital, him and Jess are reassured of their devotion to each other, and return to their home in the junkyard. Upon returning, Cade finds difficulty getting signal on his cell phone and Jess continues to hear strange noises. At one point, Cade climbs atop the roof to make a repair when he suddenly he collapses and is knocked out. He wakes up, and finds that his wife is missing. After searching the junkyard, he runs into a room hearing Jess’s voice. He finds her on a TV, strapped to a torture device. Motorman Dan orders her to speak to Cade, and provides instructions that he must kill whoever enters the junkyard or she will be eliminated by the torture device.

Cade obeys, and sees that three robbers have entered their abode. He threatens them with a machete, but it is not match for their shotgun, and they shoot Cade in the face. Even though Cade’s face is a bloody mess, he walks back into the tool shed and builds armor out of the tools found in the shop. His new body doubles his size, and spikes shoot out of his shoulders, making him the ultimate serial killing machine. Motorman Dan orders Cade to kill, and he kills anyone that enters the property in a sadistic manner. Some of the people that come to rescue them include some detectives, the realtor that sold the property, and Jess’s sister.

I found myself relating Machined Reborn to the Japanese Cyberpunk genre of movies, seeing a human built into a subhuman robotic monster with motives only to kill. The serial killing robot that was Cade had very brutal killing sprees, and ran on pure adrenaline in saving his wife from Motorman Dan’s grasp. There are many scenes of torture with power tools and mechanical devices, which sent a shiver down one’s spine viewing humans being in pain to the extreme.

Problems I had with the film were that I felt Cade and Jess were an unrealistic couple, in that Jess completely followed everything Cade said submissively without question. It seems unbelievable that a newly married woman would leave all money behind to take a chance on making business in a junkyard. Also, the apparition of a deeply scarred woman was a good scare tactic, but didn’t really hold purpose in the movie. I kept wondering why this apparition kept appearing, since the movie was not about a haunting.

Craig McMahon’s Machined Reborn is an intense slasher film that shows the consequences of leaving civilization behind, and buying into the unknown. Cade and Jess not only learn their lesson about being foolish, but become victim to a deranged psychopath that wants to build the perfect serial killing warrior.