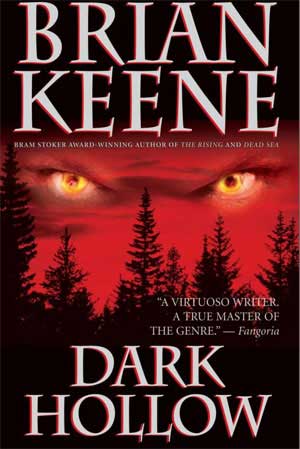 I’d resisted reading any book by Bram Stoker Award winner Brian Keene since I happened across one of his short stories on the internet back in 2002 and vowed never to repeat the error. Then this book review assignment hit my desk and finally, after much ethical deliberation, I realised I couldn’t not rubber-neck the thing.

‘Dark Hollow’ comes off the back of Keene’s other Leisure books like ‘Dead Sea’ and ‘The Rising’. We see the world through the eyes of Keene’s first-person narrator, mystery writer Adam Senft. Senft is a local writer. Senft’s wife miscarries. Senft reads his stories to his cowardly pet dog Big Steve. Senft is plagued by murderous thoughts about anyone who challenges him. Senft hears music and gets erections. Senft shares his giddy priapism with his neighbours. Senft sees a jogger fellating the satyr Hylinus, in the woods.

It’s a pity Keene’s editor didn’t insist he focus on this ‘goat boy’ as a graphical invocation of Senft’s p*rnographic guilt and rampant libido. Sneft is clearly the focal point of this ‘village madness’. To have had him as the instigator might have been a more constructive tale of Gaia retribution rather than some forest-dwelling statue summoning up unbelievable Spring erections in old fogies for whom even V-ia-gra is a dud in a rusted gun.

“What do you want, Goat Boy? You big old smelly, shaggy thing?”
Ho ho ho. Goat Boy is here to please you.
“How?”
Ha ha ha. Tie me to your headboard, throw your legs over my shoulders and let me wear you like a feed-bag.
“Aaargh!”
Hold onto my horns.
“Goat-Booooy!”
Yes, my love.
“You’re a big old smelly thing.”
Ha ha ha.

Keene’s Hylinus possesses neither the boyish enchantment of Bill Hicks’s Goat Boy (above) nor the sneering audacity of Tim Curry’s blood-red Lord of Darkness (Legend, 1985). Hylinus is just a grunting thug who f*cks your wives – so get over it. His tone, like the rest of the book is just back woods, hicks, basic. Where’s the domestic terror of The Exorcist? Where’s the neighbour paranoia of The Thing? Hylinus is the sort of character for whom myth and legend are just old jeans to sometimes piss in when you can’t be bothered to head back to the shack.

I’m being too harsh, of course, there have been many good reviews of this book but it makes you wonder what book were they reading. Maybe they have THE FEAR, the fear that Keene and his cronies will ‘say bad things about them’ on his website or several forums associated with him. Well, fear not, dear reader, this reviewer has no such fear. That’s not how the critical process works, my friend. You can’t write, you should be called on it.

There is one good phrase right at the start of the book, “The long writer’s commute from bed to coffee pot to typewriter” which really resonated with this reviewer and made me hanker for such (borrowed?) pearls of wisdom as the narrative ground on. But despite Dark Hollow’s adequate 305 pages, there’s very little in the way of literary meat for the reader to munch on. It’s all too easy to find oneself dialogue-skimming to the laborious third-act slaughter in a couple of hours.

With ‘Dark Hollow’, Leisure displays Keene at his best; drinking beer, drafting dialogue worthy of mid-afternoon soaps and concocting Mills ‘n’ Boon sex scenes that are neither compassionate enough to be considered realistic or cruel enough to be considered literary. It shows us that anything mankind (in the guise of Adam Senft) doesn’t understand or agree with he tries to kill, preferably with a gun. In light of the recent American-government-funded Israeli slaughter of the Gazan people in their 60-year-old ghetto, that’s a nice lesson for us all, eh?