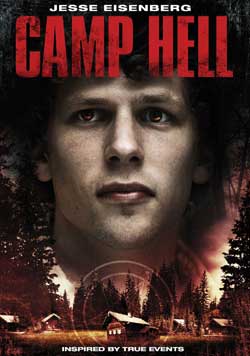 At the end of every summer, the children of a Christian community from a suburb of New Jersey attend Camp Hope. They travel deep into the woods far from any distractions the world provides. Here, the children are taught the ways of the Lord, the perils of the flesh, and the horror of the Devil. A charismatic priest leads them in their training. But, he unknowingly has brought something with him, something evil. What was supposed to be a safe place, a spiritual retreat has now turned into a nightmare that not even faith can end.

I sat down to watch “Camp Hell” thinking maybe I was in for an 80’s throwback to the days of the slasher. Or maybe even a “Friday the 13th” rip-off of some sort would have be cool. As soon as I pushed play the title screen wasn’t a blood splashed “Camp Hell” but it actually read “Camp Hope”. To say I was dumbfounded would be an understatement since I really had no idea what the hell I was watching. I couldn’t figure out what the story was, if it was propaganda, or where the true horror was. I made it through the film and I have to say it was tough to get through.

Tommy (Will Denton) is on his way to camp. He studies the bible and lives very close to God’s words along with his parents  Michael and Patricia (Andrew McCarthy and Dana Delany). God is their main focus and faith is all important. At camp, the kids are separated, boys and girls, any contact is considered a sin. No impure thoughts and no youthful influence. Father McAllister (Bruce Davison) tries to drive home the idea that sin leads to the devil and demons entering our lives. When Tommy gives in to those urges with Melissa (Valentina de Angelis), evil enters the camp and everyone’s faith is tested.

We here over and over again how sinful masturbation is in this film. Even one time is enough to let the devil into your life. If that’s the case, I may never get the chance to finish the review since I could be struck down at any moment. I really had a difficult time following this film. Tommy and Melissa dry hump and it somehow unleashed some sort of evil that McAllister may or may not be seeing. Then they really are seeing it. I really don’t know what to make of the whole thing. You may have heard of this film since it was being touted as a headlining vehicle for “Zombieland” star Jesse Eisenberg. In actuality, his screen time lasted less than five minutes in a scene that made little sense to me.

On a tiny budget, the film manages to look like it cost much more. Nice use of lights and darks that helped to bring across a feeling of hope and dread. A talented cast led by Denton (who may just end up being a breakout star) try their best to sell this material that just doesn’t work. Half the film felt like it was preaching, the other half was telling you that maybe you shouldn’t believe, then it just ends. The end never really clarifies anything and your left just as confused as you were at the beginning. There were a lot of potential ways this film could have gone and the one chosen was the worse possible one they could  have made. It was a mess that still leaves a rotten taste in my mouth.

And the kicker is that this film was “Based on true events”. Really? A teenage boy masturbating. Or was it the dry humping. I don’t really know what events they were referring to. People take to extremes when it comes to religion. Kids rebel when they are younger. As they grow they will form their own opinions. Some will change and others evolve to fit their own lives, what works best for them. Mine has changed more than once and it all comes down to faith. If this film is meant to help you form some sort of opinion on where your faith lies, or if you have any at all, then they failed miserably. Sorry guys but this one completely missed the mark for me. I’m still scratching my head over this one. Maybe some day I will sit down and watch it again and try to figure it out but for now I think I will just wait for Kevin Smith’s religious themed horror film “Red State”. Hopefully that will be the one I am looking for.

Eisenberg Brings his own ‘Camp Hell’