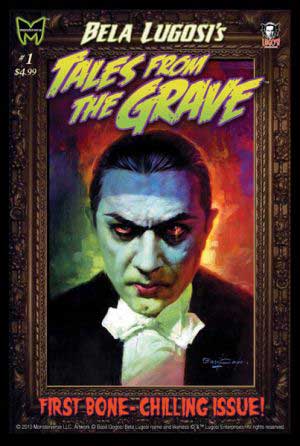 “BELA LUGOSI’S TALES FROM THE GRAVE is a full-color comics anthology in the classic EC and Warren tradition that presents weird and fantastic tales. In a special arrangement with Bela G. Lugosi, Bela’s son, the DRACULA actor will act as host and commentator for each terror tale. The standard cover for issue #1 features a Lugosi portrait by legendary monster painter Basil Gogos.”

Artwork: 4.5 out of 5
Well I have to admit I has a little bias here, I love Rob Brown’s work. So yeah I kinda knew that I was going to love his story all by itself. So yay Rob. Now let’s talk the rest of the book. Great artwork throughout this issue is actually easy to come by, since it is on every page. The only story that I kinda took some points off for was Joe Freire’s, because it was photo’s. Now that being said, they were awesome. It was almost like answering the question. “Can Robot Chicken come to comics?” YES! Most of the book has an awesome classic feel to it as well. I would have to say that it really fits in with things you would see Bela Lugosi star in. From start to finish it can all be summed up into my favorite word GORE-Geous!

Story: 4.5 out of 5
Just like the artwork mostly everything presented here has an awesome classic twist added to it. So it’s no surprise that old school horror fans should feel right at home here. Newcomer’s to an older style of horror are also in for a treat. Every story was full of depth and or course that perfect mesh horrible goodness. Matter of it reminds me of a song, “(They) made the Mash, The Monster Mash, it was a Graveyard Smash.” As I always say with anthologies keeping work consistent from story to story with different creative teams is not always easy, matter of fact it’s hard to do. So take it from me, this team worked hard to bring you the best product they could, and from a readers stand point I was not let down.

Dying Breath: 4.5 out of 5
Do you know what book you have been waiting for the most this year? What!? Really… well no, it’s this one. Solid Artwork, solid stories and one decapitated head telling you that this is the way to go. Yeah I think that’s really all that needs to be said. Anthology fans, read this. Classic monster movie fans read this. Anyone reading this, read this book! I loved it, now when can I expect #2?

If you would like to buy or know more about Bela Lugosi’s Tales from the Grave #1 you can find it at www.monsterverse.com/