Home | News | The Horror! The Horror! Comic Books The Government Didn’t Want You To Read!

The Horror! The Horror! Comic Books The Government Didn’t Want You To Read!

THE HORROR! THE HORROR!
COMIC BOOKS THE GOVERNMENT DIDN’T WANT YOU TO READ! *Actual language from “Comic Books and Juvenile Delinquency,” interim report of the Committee on the Judiciary’s investigation of juvenile delinquency in the United States, 1955–56

“The Horror! The Horror! is a thrilling discovery of long-buried treasures.” —R. L. Stine

In The Horror! The ­Horror! Comic Books the Government Didn’t Want You to Read! (Abrams ComicArts; November 2010; U.S. $29.95/Can. $35.95; ISBN: 978-0-8109-5595-0), Jim Trombetta uncovers a rare visual treasury of some of the most important and neglected stories in American literature: the pre-Code horror comics of the 1950s. These outrageous comic book images—censored by Congress in an infamous televised U.S. Senate subcommittee hearing in 1954 investigating juvenile delinquency—have rarely been seen since they were first published. Now these vilified comics are ­revealed once again in all their eye-popping glory.

The Horror! The Horror! showcases more than two hundred covers and complete stories scanned from original copies in the author’s extensive collection. Trombetta’s informative commentary provides detailed history and context for these stories and their creators. A bonus DVD of Confidential File, a rare twenty-five-minute TV show that first aired on October 9, 1955, about the “evils” of comic books and their effect on juvenile delinquency is also featured. Ultimately, this book spins an expressive tale of horror and government censorship as scary as the stories themselves.

About the Author
Jim Trombetta has been a Shakespearean scholar; a reporter and editor for Crawdaddy, the Los Angeles Times, and other publications; and a writer for numerous TV shows, including Miami Vice, The Flash, and Star Trek. He lives in Los Angeles. 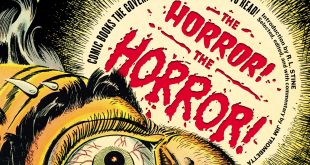