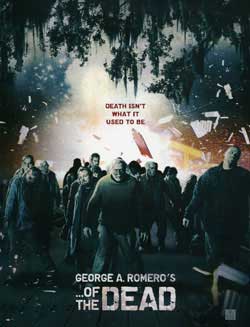 Rebel military man Crocket (Alan Van Sprang) and his band of rogue soldiers seek refuge from the living dead, only to land squarely in a family feud between the undead-hating O’Flynns and the Muldoons, a cure-seeking clan determined to help their zombie kinfolk. Cult horror master George A. Romero rises again to deliver another delicious zombie fest where the festering question is: Can a caring family coexist with their flesh-eating loved ones?

I’d have never guessed that the George A. Romero directed release “Survival of the Dead” would be centered around a Hatfields vs McCoy style scenario. Though in this case the clans are named the O’Flynns and Muldoons. Both local residents on a beautiful island named Plum have spent their years occupying it as divided enemies.

In our current world and situation we have long passed the era of zombies as a new outbreak leaving the remaining folks, or living for that matter….. to live with among them to a certain extent and exterminate them as often as possible.

The idea is very simple….the less undead walking around the less the threat …however those who die become zombies unless shot in the head…so while a bite may speed that process up, they still have to deal with zombies after death. These walking piles of mindless flesh are easy targets but they also never seem to quit unless killed off. So while some walk about, others hide in nooks and crannies or even at the bottoms of lakes.

The world has gone into survival mode with people killing people for money and resources and a general selfish attitude of kill or be killed. Life has seemed to become just a privilege that those who managed to stay alive have been able to carry on forward. Our story begins as several of the O’Flynns are held at gun point to leave the island so that the Muldoons can “sort of” preserve the dead by chaining them up and waiting for a future cure. What “that” has resulted in is a flock of dead folks caught in repetition based on instincts of their previous lives. Not smart of course…but atuned.

Though the dead lack any real skills to contribute in their mental states. I couldn’t shake the hell in paradise notion or maybe it was the strong…..if its perfect, humans will still screw it up feeling that prevailed thru and after the films completion. Do I think all Romero fans will love it? maybe so….maybe not, though it is a different approach that doesn’t rely on mere zombies roaming the cities scenario. And in my mind, the “zombie in city” thing has been done to death.

Romero has created a pretty well thought out story with this addition to the legacy. We get alot of compassion, character build and human emotion that blends nicely with pretty hard core gore. In fact, this film probably features some of the coolest head exploding, shot in he face… and zombie kills I’ve seen on screen in quite some time. My favorite is the fire-extinguisher-in-the-mouth-till-their-eyes-explode segment. There is also a heavy does of dark humor in segments as common folks become inventive with zombie warfare. One example is a small group of hunters who place a handful of still functioning zombie heads on poles for amusement. Again this is a great example of the special FX work with really shines in this film that is handled mostly by the SPIN FX group. Some of the head explosions are pretty in your face relying on CGI than say the old school way of doing it like you might find in old films like “Scanners” Though I am anticipating the horror crowd to still be on either side of the fence with this…… some folks don’t like CGI whether its bad or good…period.

Survival of the Living Dead excels in the fact that it really feels like a sequel in which “Diary of the Dead” was more of an experiment for Romero. I can easily see this picking up where “Land of the Dead” left off. It also mirrors a perspective of our society and how we would most likely carry forward if this wasn’t a fiction situation. Somewhere in the chaos of the unliving, the movie leaves behind a message about perseverance and ignorance even in the face of the fantastical and horrific. SOTD is another shining moment for the Romero legacy which carries forward a welcome addition to the “dead” series.

Tags Survival of the Dead