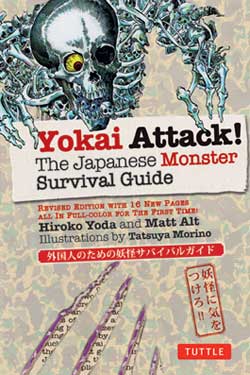 Yokai Attack! The Japanese Survival Guide. So you say you want to educated more on the Asian culture? Your a fan of monsters and horror films? You would like get a better perspective on some of the creatures the Japanese fear? Well you’ve come to the right place. Before we start, yes this book is in English as I’m sure American viewers would want to know that off the bat. At this point in the film culture of Asian horror and especially the recent crossovers to US and US remakes, it’s a good idea sometimes to get a acquainted with what “kinds” of creatures and tales scare the Asian culture so you have a firmer base to equip yourself with. The good news is, this book is not only a cool read but does just that!

Yokai as described in the book are Japan’s “spookiest monsters” handed down from many generations. The Yokai never die just fade away till there return .They do run the gamut of danger and treacherous natures with some being able to rip you apart, some haunt, some just appear in eerie places. So for those familiar to a Dungeons and Dragons way of thinking these creatures have strengths, weakness and stand for different purposes. Usually they have spawned from culture fears that have originated from child tales and tales that have to do with vengeance, uncleanliness, morals, eating, neighbor issues and so on. the idea of them stems from ancient stories, folklore, wood carvings, scrolls and publications. This book we are given a pretty interesting overview per way of author Hiroko Yoda and Matt Alt. This is accompanied buy the detailed and historical based illustration work of Tatsuya Morino. Yes, the kids can have a look too, as many illustrations are fun, silly and sometimes scary. But none-the-less, this is an impressive book of artwork that goes hand in hand with a informative handbook on these creatures.

As american cultures, we were really as a whole introduced to Japanese horror per way of US crossovers such as Grudge and Ring. This started a avalanche of investigation into more Asian horror films than we could keep up with. Usually subtitled and usually imported. Though even as a viewer some ideas just seemed more bizarre than inventive. So we made assumptions that it pretty much stopped at Asian girls with white face and long hair. Though interestingly enough many of the ideas came from “other” beasts and tales that we never had the glory if really getting introduced to. This book does just that! For instance a few creatures have the ability of long necks and snakelike metamorphosis (Nure Onna, Rokuro Kubi) while others are cursed with carved, snake teethed mouths. (Kuchisake Onna) We have one creature that shows up as an eye looking through holes in walls (Mokumoku Ren)We have another that exists on in the hair of a female and reveals itself as hidden mouths (Futakuchi Onna) and this is only a taste. What about a hidden dark wall that comes out at night (Nurikabe) or a group of restless spirits (Funa-yurei). Hey, if that doesn’t peak your interest, we have a whole lot of creatures that appear due to uncleanliness (not washing, dirty dishes, unmade beds…)

I think you are getting the picture! The Japanese have long had creatures based on different terms than the slasher complex of American films. I know I’ve seen these traits mentioned appear in quite a few Asian horror releases. So your in luck! The sections provide not only backgrounds but appearances, surviving an encounter, weapons, attack details, features, descriptions and lots of culture pics that show the readers where these ideas were originally displayed. It is bound in a nice 5 x 7.5 format with b& white and color illustrations throughout. The design is set up both easy to read and cleverly displayed with a collage-like approach. Paperclipped notes, pieces of fabric, masks, stapled and sticky note sections and even tabs (all designed into the prints) are all part of the presentation on this one.

Aso from this series:
Yurei Attack!

Update: This book has been recently updated to now include all full color pages

A very cool book that is a “must” for horror enthusiasts and Asian horror film lovers worldwide! 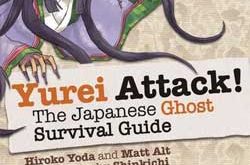