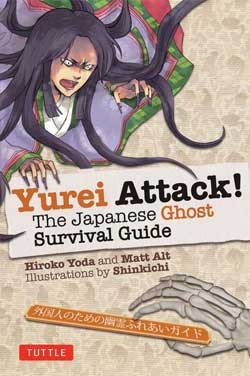 It probably goes without saying…but “at long last”! This latest edition by the publishers at Tuttle is quite a cute little read. It’s full of color pictures, beautiful illustrations (per Shinkichi) and most of all the information you probably have been aching for. I’m talking about us lovers of Asian hHorror films and folklore. I’ve seen countless Asian horror movies under the basis that these reoccurring ghost girls are one of the same or of the same origin. I’m sure you’ve wondered more than once those common questions such as…why the long black hair, why always (or mostly) girls, why are they always so vengeful and why do they act, look, and move so weirdly? I of course assumed a style preference among filmmakers and not to mention that they are pretty damn scary. But low and behold there is a reference manual and its arrived just in time.

Now, if your like me, then you probably wondered what has inspired these filmmakers and why? “Yurei Attacks” is subtitled as “the Japanese Ghost Survival guide”. It feature chapters that are categorized depending on the type or style of ghost. It also works much like a Japanese dictionary of scary entities. Rather than just a description we are given the story that this particular ghost claimed origin from, a separate paragraph of analysis, and what recommendations you might be advised for in the “event” of an encounter.

Now of course it states that much of these are based on fiction, folklore, and legend..but the Japanese tend to really believe in those rouge spirits to the point if it being cultural. The culture is “much” different than the West. This factor is often referenced so that we can better understand the source of these spirits. You might ask “why” so many women? But we soon find that due to cultural and historical factors women have often been abused, oppressed, accused, or killed many times for undue causes. From these acts emerge the ever-so-scorned vengeful ghost. Each of the entries have their claim to fame which details if the ghosts are more frequent or rare for that matter.

The book does a great job with plenty of cartoony illustrations to help us envision the entities or stories that go with them. Now of course horror fans usually approach Asian films with the basis of it simply being a ghost. However now we can better put the pieces together with names to go “with” the types. Yep, you’ve seen em..the ghosts who manipulate their hair, the ones who lurk deep in the wells, the ones who are focused on the deeds of her former lover who caused her death, and even those ones with the flying heads. We get names such as “Oiwa”, “Okiku”, Isora”, Orui” and others.

Maybe it’s the male phantoms you interested in? Hiimi-Sama, Sakura Sogoro are just a few. Or maybe it’s the haunted locations themselves. We’ve had our share of “those” films that claim a certain spot is noted to be haunted and has become really cheap on the real estate end. Wasn’t it the “Grudge” movies that used a reoccurring locale for its films where recent evil lurked about?

The images within are best described as “fun”. Not particularly scary but illustrated in a cartoon way that has a slight bit of manga influence.

The book ends on my favorite part which is some greater details in the Japanese Hell known as “Jigoku”. Like Dante’s Inferno, “Jigoku” has its level of hell and torture. The explanations while intimidating are explained of those who have died and gone onto this place. It’s probably worth stating that these descriptions act as a great deterrent for exercising bad deeds during one’s lifetime.

A unique book that’s small and part of a 3 part set. We’ll be covering all 3, so make sure to read our other reviews on the different releases from this series.

Aso from this series:
Yokai Attack! 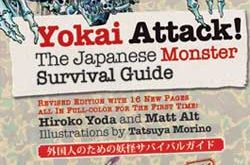