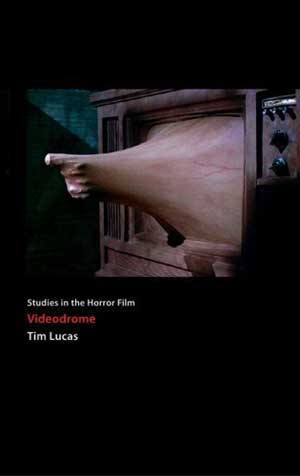 When I received the book titled: Studies in the Horror film – “Videodrome” I was half expecting one of those books that belabor over the philosophical meanings behind the work and how it compares to the psyche of societies downfall. Not that there is anything wrong with those types, though they can get a bit wordy and pretentious.

No that isn’t this book, much to my delight. Tim Lucas was one of the only reporters journalist brought on to the set of VideoDrome and invited by Cronenberg himself to document and write about. 1981- 1983 was one of those years when alot of really weird stuff was surfacing. Cronenberg had already a reputation for violent, abstract and horror genre cinema. VideoDrome which is now regarded as one of the all time classics and David’s best work was regarded as a commercial failure which took new life in the cult circles later on.

The book documents interviews and set visitations conducted in the pre-production phase when the film was evolving into what it was to become. Uniquely now knowing how it all ended, it is a great joy to read like a blast from the past ….the thoughts and issues that occurred during and before its realization. VideoDrome would fore shadow unknowingly the world we live in today on a more esoteric level. Perhaps David had his hand on the pulse of things to come as a filming seer of sorts or just is a brilliant mind who’s imagination mirrors mankind’s future outcomes???

It is however hinted that Cronenberg’s prophetic visions have found there way into the mainstream. A good case in point is the public fascination with the coined “torture p*rn” wave. It’s no surprise seeing David’s onscreen torture clips from the Videodrome monitors that mirror today’s recent hits like “Hostel”, “Saw” and a gaggle of others. Who’d have thought?

The book covers everything from David’s approaches to his earlier works to his in process approach to Videodrome outcomes. Though the focal point is the journey of Videodrome itself which is a term used to describe the notion of the video arena.

Probably the best description comes in the simple term “irreal” which in 1 word easily embodies David’s film directional approach. I was enthralled when I read about his changes that occurred along the way and the “scenes” that never came to light. In many the sense, these scenes of bodies morphing, dripping and embracing the surreal are something that I would have loved to see make it in the final drafts. Though its also mentioned that there was a certain pressure to deliver on his concept without going over the line so much that the film would be banned from being shown. I think David hit the marks beautifully and still on his own terms.

Lucas does an outstanding job putting together a book of interest. The interest comes in the way he marries the idea of Cronenberg’s work with the details of the ongoing production he was a part of. Interviews with cast member helped to also season the presentation with clear look at the folks involved. Debbie Harry who was in her heyday of Blondie stardom is revealed with a honest portrayal of someone just trying to be the best actor they can on short notice. I for one think she nailed it with grace and a touch of surreal that echoes her persona as a photographic music personality.

Further digs goes into more detail on the films production and several of the unused portions. Interview and profiles are conducted with the main cast while we get a whole section that is exclusively focused on the FX used. This was one of my more favorite parts to see how they pulled off some of these gags (way before computers were used as aids) The practical fx setups are fascinating and i’m sure a bonus to anyone in the business. As we follow Tim’s time on set and his reporting, we learn that he has spent the better part of 10 years visiting sets and being a part of Cronenberg’s projects. The passion and dedication Tim has shows in rare form on one of the best Cronenberg film focused books I’ve yet to read. Cronenbergians would do themselves good to pick this on up and share in the fascination. 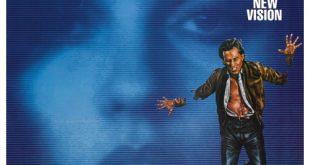