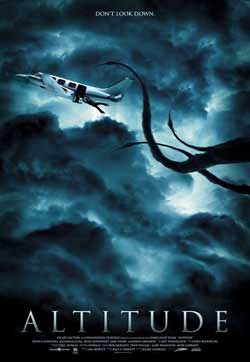 After a mysterious malfunction sends their small plane climbing out of control, a rookie pilot and her four teenage friends find themselves trapped in a deadly showdown with a supernatural force

I’ve noticed a new trends beginning to emerge within the horror industry that really capture alot of elements left by the wayside in last years over the top torture films. However, it may be the saving grace needed before us purists decide to call it a day and disregard modern horror as tasteless extremes without purpose or substance. “Altitude” follows in the same path such as recent films like “Frozen” who “do” take the idea of tension and circumstance seriously.

The name of the game is situational horror and Altitude is full of it. “Altitude” really in simple form is about a few kids who have decided to accompany their rookie pilot friend Sara (Jessica Lowndes) on an excursion getaway.

Sara’s friend Bruce (Landon Liboiron) a dissonant, reclusive and somewhat of an enigma almost turns the outing down but agress to come along as a favor to Sara. Their relationship is a bit confused, and probably more assumed than a model for a typical relatiohsip. The rest of the group doesn’t care for Bruce that much which causes a bit of tension on the plane ride. Though personality issues are the least of their problems when an expected dark cloud formation engulfs them and takes them into darker issues. As a new pilot, Sara is permitted from flying above clouds and must stay in view of the ground at all times. The ominous cloud comes at them so fast that it leaves zero time to turn around and avoid it. This is when the real journey begins. The cast on board includes: Sara, Bruce Mel (Julianna Guill), Cory (Ryan Donowho) an Sal (Jake Weary). There are a few moments that will test audiences wits on being a little too hard to believe, but that is also the fun of the cinematic experience.

Altitude provides a bite your nails kind of situation that combines alot of tension building techniques to raise the bar. We have a new pilot, friends that are starting to turn on each other, loss of communication, no ground in site what so ever, a lack of fuel, and a sky that on the most part has blocked all view of any familiar surroundings. Flying blind might be enough on its own, though when the equipment also begins to fail it appears that things are actually getting worse by the moment. As this all takes its toll on a bad situation, there also seems to be an almost hallucinary presence of something else in the skies.

This is approached in a very clever way that is closer to a phantom presence than a old school monster in the skies kind of setting. I don’t believe a reviewer should spoil all the fun and reveal everything, but I can tell you the premise has this way of being hallucinary itself while almost in synch with the charters own feelings about the situation. This method plants not only a sense of survival expectations but also a supernatural surreal aura that in many ways reminds me of something Stephen King would pull in one of his films. “Altitude is directed by Kaare Andrews who does a great job of getting a believable performance form his cast. The film appealed to me, because while it does fit into current trends its story holds its own with a twist and turn formula. Gripping, strange and a great nod to old style horror premise. 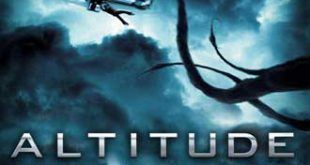