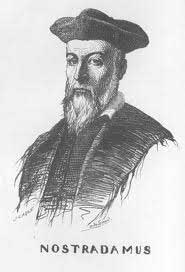 In your years of studying Nostradamus, have your become disillusioned or even disappointed in the facts that you’ve uncovered about him and his legend?

Very much so. This is a common experience among academic scholars studying Nostradamus. The more they study him, the more skeptical they are forced to become, as it becomes more and more obvious that the
many myths about him are simply not borne out by contemporary documents or by the texts of the original Prophecies themselves — which in the case of my new book ‘Nostradamus.

Bibliomancer’ are actually presented in facsimile on the accompanying CD so that readers can check them for themselves.

Why do so many people want to believe in him?

That’s a fascinating question. Possibly it’s because we are all afraid of the unknown, and especially the future unknown, and so we are drawn to any guide who purports to know what is going to happen. Would-be
seers and clairvoyants throughout history have benefited from this. But there are also those who feel that Nostradamus backs up their fanciful view of the world, or who simply want to bully the gullible
by scaring the living daylights out of them, and so they find Nostradamus an irresistible tool for doing so. And that, of course, is without even considering the opportunistic authors and publishers and major documentary TV channels who are simply out to make a fast buck by presenting the lurid is if it were fact. 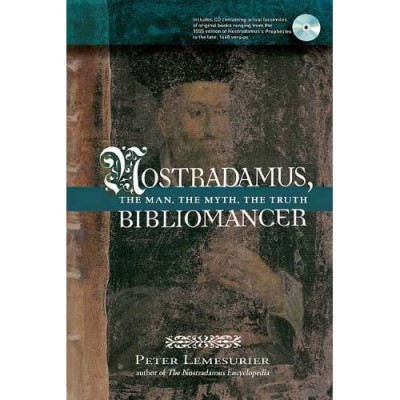 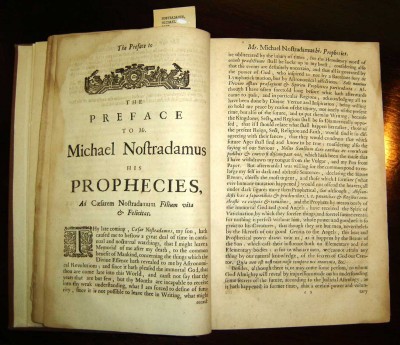 If Nostradamus is not a prophet, does that mean less profit for what has become such an lucrative industry based on his quatrains?

It might do, if it were universally accepted that he was not a prophet. But I rather doubt that it will be any time soon. The industry has proved far too lucrative for it to let go of the myths that it has created. Yet, to my mind, discovering what sort of a man Nostradamus really was, what he was trying to do and how he tried to
do it (which is what I have endeavoured to do in the book) is, in my view, just as fascinating in its own right — and far more believable! 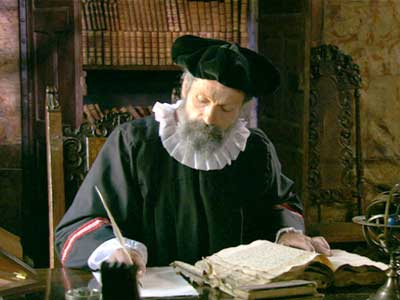 In the 16th century, did Nostradamus himself make any money writing his almanacs and prophecies?

Nostradamus was the first actually to make his living by publishing annual almanacs. These were sold in the streets at the November fairs all over Europe (including the Frankfurt one), so it seems reasonable
to assume that he made a sizable income out of them. It didn’t matter that they were usually wrong, even when you could actually work out what they were saying. In his will, in fact, he left the equivalent of
some $300,000. After all, what do you do when this year’s almanac turns out to be wrong? You still buy next year’s, just in case. It seems unlikely that he made quite so much out of his Prophecies, though, as people were interested mainly in what was just about to happen to them, not in what might happen in a far distant future that most of them didn’t even believe in, given that the End of the World was supposed to be at hand…

How common was the practice of Bibliomancy?

It was a very ancient divinatory technique, practised (especially among the religious) almost since the dawn of time – or of literary time, at least. It was practised among the ancient Hindus, the Hebrews and the Greeks, and was well known to Christians, too, right up until Nostradamus’s time. Some people still indulge in it today. So it’s inconceivable that a man as fascinated by ancient divinatory techniques as Nostradamus was should not have heard of it. Basically, it involves

This final phase can be based either on (as it were) selecting a passage with a pin, possibly while wearing a blindfold (which might be called the ‘strict’ method), or on simply seeing which passage jumps out at the eye (which might be called the ‘psychic’ method). Knowing Nostradamus’s personal proclivities, the latter approach seems more likely to have appealed to him as being more in keeping with his role
as an esotericist.

Who else practiced this technique?

Among the Romans it was a state-sanctioned technique known as the ‘sortes virgilianae’, and was practised, as the name implies, on the basis of the supposedly prophetic works of the poet Virgil (which Nostradamus himself knew and imitated, calling their author the ‘Prince of Poets’). The Emperors Hadrian, Alexander Severus, Gordian II and Claudius II are all known to have practised it. Even St Augustine of Hippo is said to have identified his future vocation by applying the technique to the text of St Paul’s letter to the Romans.

Was there an instance where this Bibliomancy technique worked for Nostradamus and his prediction was right on the mark?

Whether or not by using Bibliomancy, in his 1558 covering letter to the King, Nostradamus foretells an upheaval one October (albeit accompanied by a huge earthquake) that will last for 73 years and seven months. This more or less fits the rule of communism in Russia, and the figures suggest that he arrived at it by using astrology, even though he was usually notably incompetent at doing so. At this time, he says, the Christian church will be restored by somebody from the 50th degree of latitude. Since this is the latitude of Cracow in Poland — the hometown of the contemporary Pope John Paul II, who had more than a little to do with Soviet communism’s final collapse — the resemblances are highly suggestive. Nevertheless, it needs to be remembered that John Paul II was not noted for his religious reforms, while no actual year or country is attached to either prophecy, and so any evidence for the prediction’s success remains entirely circumstantial.

Apart from that, there are a couple of predictions in the Prophecies that seem to apply successfully to the then French royal family — though, as these only appear in the posthumous edition of 1568, it is possible that they were inserted or modified later by the seer’s secretary Chavigny, who is known to have done that sort of thing on other occasions in order to prove his late Master ‘right’.

To be ‘right on the mark’, though, a prediction would need to specify a date. Otherwise it would merely be a kind of catch-all, liable to apply whenever an event of the kind decribed comes around again. That is what the Nostradamus industry thrives on, and the Nostradamus nutters even more so. Unfortunately, though, he only mentions about 18 dates in his Prophecies — Bibliomancy alone doesn’t normally deal in dates — and virtually all of them have proved wrong.

Did Nostradamus ever predict anything about how the content of his work would be studied for centuries?

No, but he did predict that he would be much more famous after his death than before it, and that 500 years later people would be happyn about his predictions. So I suppose that, to that extent, he was right.

Do you think Nostradamus truly believed in his own prophecies?

I’m sure he did. He wrote so vaguely that he seems to have managed to bamboozle even himself. After all, quite apart from the 942 predictions in his Prophecies, he wrote 6338 others as well in his annual Almanachs, all of which were for particular years. Yet when you actually analyse them against the historical record, you find that only some 5.73% can be ranked as definite hits. That isn’t always obvious, though. After all, if you say things like ‘There will be peace and no peace’ or ‘Many lords shall be born, and others shall die’ (as he did), you can’t go far wrong, can you?

Where will your studies of Nostradamus take you next?

Alas, you can never predict the future!

Thank you for taking the time, 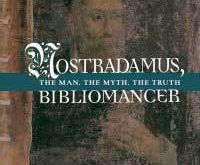