Film Review: The Tales of Strango the Clown: The Chronicles of Gillygutz (2020) 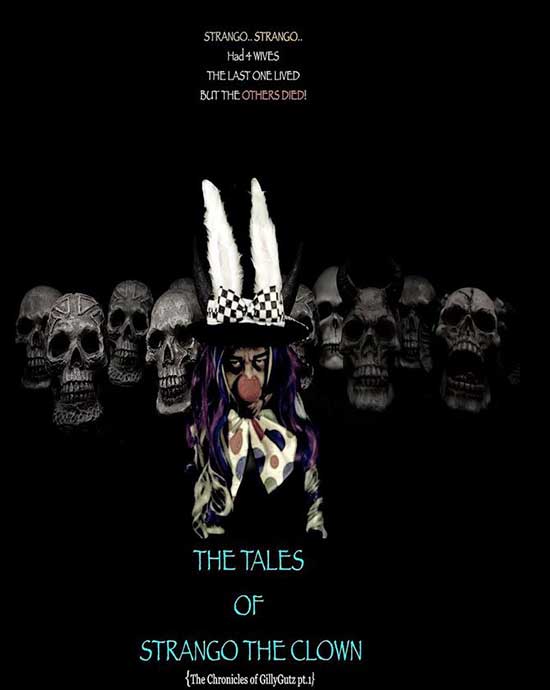 A murderer becomes a stand-up comedian clown broadcasting over the dark web, and narrates his life from a futuristic prison.

The Tales of Strango the Clown: The Chronicles of Gillygutz (2020) is as strange as the title suggest, and then some. It’s a quarantine-filmed green-screen feature that’s starring, directed by, and written by Erwin Douglas. Douglas, a former local cable show host, has put together a film that elaborates upon the life and murders of fictional serial killer and comedian on the dark web, Strango. With a shoe-string plot, effects on par with Uganda’s cult hit and clip-art megamix Who Killed Captain Alex, there’s a strange allure to The Tales of Strango the Clown that makes it more than the sum of its meager parts (though it certainly isn’t for everyone). 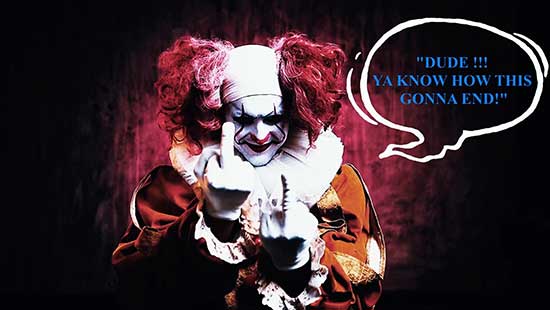 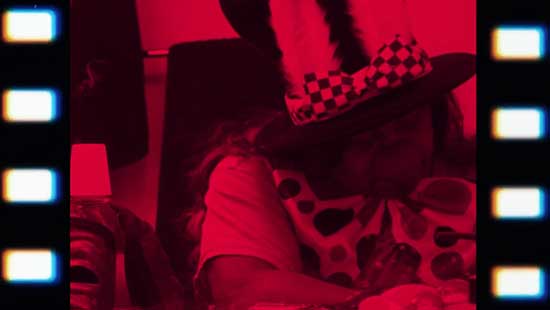 The story is told in flashbacks by the titular killer clown from his high-tech, futuristic prison cell. Now, whatever you’re picturing that to look like, cast that image aside. Strango’s prison is made of clip-art flames, stock footage, and wild royalty free animation that would make Microsoft’s Clippy the paperclip feel right at home. The flashbacks take two distinct forms. One consists of Strango in his former life as a normal-appearing man as he kills each of his wives. The reasons for his murders range from infidelity to the more humorous “being a Trump supporter.” These murder segments are narrated through voice over, so the onscreen acting in them is limited to running, mugging, and playing dead. The other segments are stand-up comedy bits (yes, you read that right) of Strango purportedly performing to a webcam for viewers over the dark web. The comedy bits, from the perspective of a mid-level comedian myself, are relatively engaging, and those familiar with the COVID-19 era’s “Zoom” comedy shows will feel right at home. The material centers around “taboo” subjects like pedophilia in the Catholic priesthood and murder, but the jokes aren’t any more inappropriate than what you might hear on a Netflix comedy special. With that said, Douglas does understand joke structure, so even the filler jokes are tolerable, and the occasional zinger is worthy of a genuine chuckle. 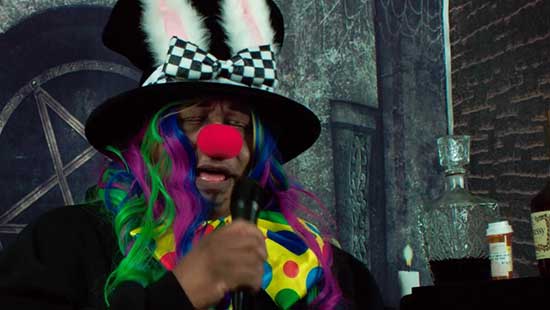 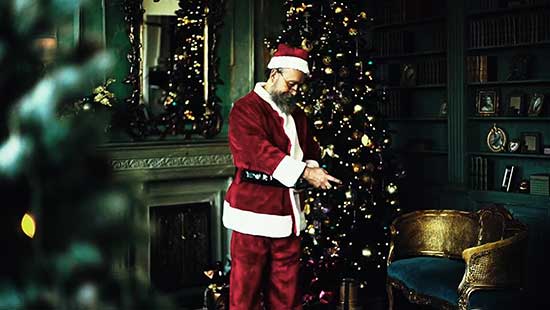 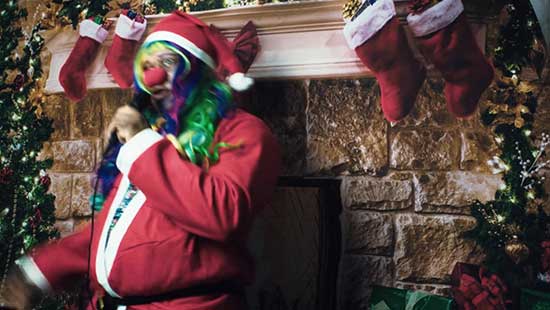 More problematic than any of the stand-up jokes are several lines that could be seen as transphobic and racist towards those of Asian ethnicity. While these are never fun to hear, it should also be mentioned that the characters uttering them are not portrayed as good people—in fact, they’re presented as vicious psychopaths, so take from it what you may. Still, given the current climate in the U.S. where transgender and Asian individuals face high-levels of violence against them, it’s hard not to cringe at the lines all the same. 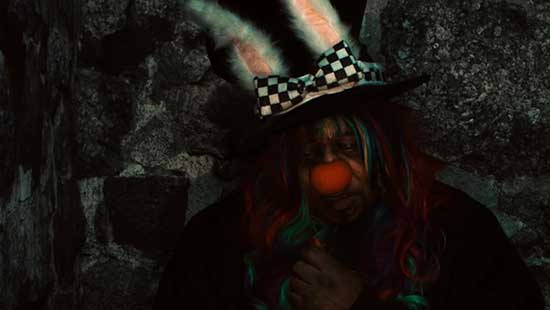 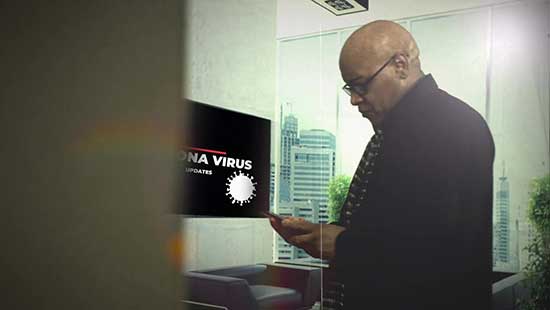 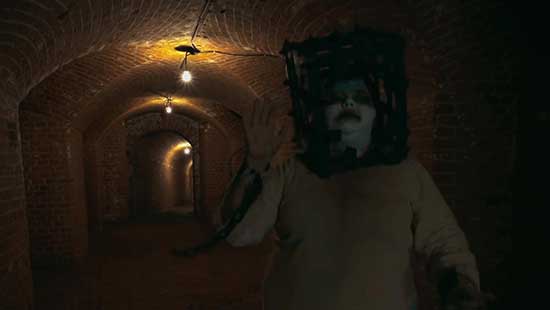 With the oddball presentation, topical references, and insane high school computer-lab graphical effects, it’d be easy to pass The Tales of Strango the Clown: The Chronicles of Gillygutz off as a YouTube vanity project suitable only for friends and family of the filmmaker. And while it’s certainly that, there is something more engaging here, and I think it’s the personification of indie-filmmaking’s most powerful asset—gumption. That is to say, Erwin Douglas, stuck at home due to a worldwide pandemic, got a $1400 stimulus check from the U.S. government, and instead of using it to buy groceries or get a PlayStation 5 console from an online scalper, he said “Screw it! I’m gonna make a movie!” What’s more, he knew he had to craft something with a limited scope that could be done quickly and with a nearly non-existent cast; hence, The Tales of Strango the Clown was born.

This idea of understanding the scope of a project cannot be understated in the craft of filmmaking. Countless films’ footage sits degrading in 8mm cassettes and on VHS tapes, lacking critical scenes needed to make a complete film possible, all because the filmmaker’s envisioned project was beyond what they could realistically accomplish. This is something Douglas understands, and his creative solutions to problems involving needed screen time, cast, and engaging visuals should be commended. His performance as Strango, too, is solid, which is no surprise given his 15+ years of cable hosting experience. His gritty voice fits the character well, and reminded me of a new onscreen interpretation of the Vindicator’s clown from the Spawn comics.

Overall, whether you will find The Tales of Strango the Clown: The Chronicles of Gillygutz entertaining is highly dependent on your interest in cinematic oddities, your tolerance for socially problematic content, and your ability to look into a film’s inner workings rather than its entertainment value, alone. If you can see beyond the ultra-low budget surface and troublesome bits, Erwin Douglas’s first feature endeavor stands as an accomplishment of ingenuity, and I am genuinely curious to see his next project contains.