Opens in Select Theaters, on Digital Platforms
and VOD on February 26th 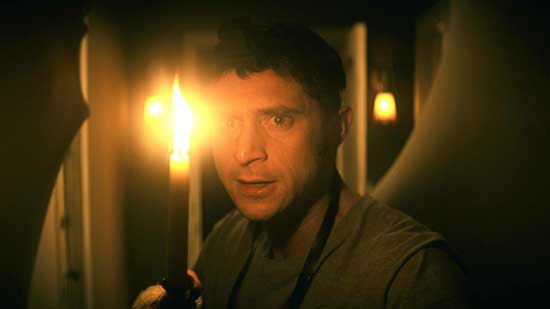 “The Vigil is proof that bible-thumping priests and haunted converts can’t have all the spooky fun. The filmmaking maintains its gripping spell all the way through; A remarkable showcase for Dave Davis, who commands every scene.”
– Eric Kohn, IndieWire

“Get out your tallit, your tefillin and your terrifying visions of a diabolical entity because The Exorcist is coming to Borough Park. A devilish, and very Yiddish, bone-crunching chiller.”
– Jordan Mintzner, The Hollywood Reporter

“Cultural context adds to an effectively creepy chiller. Anything might be (and usually is) hiding in the shadows. Davis is excellent.”
– Dennis Harvey, Variety

Steeped in ancient Jewish lore and demonology, THE VIGIL is supernatural horror film set over the course of a single evening in Brooklyn’s Hasidic Borough Park neighborhood. Low on funds and having recently left his insular religious community, Yakov (Dave Davis) reluctantly accepts an offer from his former rabbi and confidante (Menashe Lustig) to take on the responsibility of an overnight “shomer,” fulfilling the Jewish practice of watching over the body of a deceased community member. Shortly after arriving at the recently departed’s dilapidated house to sit the vigil, Yakov begins to realize that something is very, very wrong.