Ticked Off Trannies with Knives: November 2010

Presented in the style of classic 70s revenge films, “Trannies” tells the tale of the sweet and lovable Bubbles Cliquot andher band of fellow transgender vixens. After the ladies fall victim to an ambush by a baseball-bat-wielding, tranny-hating rapist named Boner, they set out to get cold-blooded, high-heeled vengeance with the help of some bladed weapons…hysterical bloody mayhem.

Synopsis
Revenge takes balls, and no one knows it better than the ladies of “Ticked-Off Trannies with Knives”, Israel Luna’s over-the-top tale of sisterhood and cold-blooded, high-heeled vengeance. When the innocent and likable Bubbles Cliquot shows up for her nightly stage performance with a black eye, her transgender sisters suspect foul play from her latest boy toy. In an attempt to get Bubbles back to her bubbly self, the girls take her out for a relaxed night of c**ktails at a local gay bar. After a few drinks, the ladies’ troubles seem far away, and Bubble’s friends Emma Grashun and Rachel Slurrconvince her to join them for a triple date withapair of charming boys. Sadly, not even three tough-as-nails vixens could be prepared for the ambush that comes next. It turns out the blind date is set up by Boner, the baseball-bat-wielding, tranny-hating rapist who gave Bubbles her shiner. After luring them into an abandoned warehouse, Boner and his two beefy minions unleash all their hatred on the unsuspecting ladies, leaving them bashed and bruised, but not broken. After waking from her coma, Bubbles enlists the aid of her friends- the sharp-tongued Rachel and the fiercely protective Pinky La’Trimm- to bring her attackers to bloody justice. The ladies get in touch withtheirinner Zen before arming up with an assortment of bladed weapons and dressing in their finest dominatrix gear (if their knives don’t kill, their looks surely will). Not even a man as psychotic as Boner could imagine the well crafted and ingeniously planned bloodbath that ensues. The moral of the story: Hell hath no fury like a tranny scorned.

Ticked-Off Trannies With Knives was created because of the hate crimes toward the gay community. I would read an article about a young gay couple on vacation and being bashed. I’d read another online with surveillance video of an older man leaving a gay club and being beat up by three guys. It made me mad. But what flew me over the top was my dissatisfaction of the gay community’s response. Quotes like, “Let’s take this opportunity to educate and understand the bashers” or “let’s fight hate with love.” I thought “HELL NO!” Why do we have to be nice-y-nice? Why can’t we, as gay people, get angry? Why can’t we get mad? So, I wrote TOTWK out of this frustration. I wrote the script about transgender women who are bashed and left for dead but this time the girls come back, trap the guys, torture them then kill them. I’m not saying to kill anyone. This movie is a fantasy andIknow for myself that I’ve always had that fantasy of beating up the guy who picked on me in the playground. I’ve thought about punching the guy that kept calling me names in the hallway. This film is for everyone who was ever picked on and had had enough.

It was disheartening when protests began from transgender women. I wanted this film to be empowering but many of them focused on the word “Trannies” instead and argued that it was a pejorative term. I used transgender women in my film, in front of and behind the camera. They use the word. Many of my transgender friends and transgender family members use the word. So, I decided to keep it in the title. I see it as the word “queer” or “dyke.” Some people don’t like them but others don’t mind it. In the end – it’s not a universally pejorative term and we can take it back. If we do, we take the power away from it. If I’m walking down the street and someone yells out “faggot!” I smile and hoot and holler and say, “Tell me something I don’t know!”

When GLAAD came out against the film, I think they jumped the gun. They can dislike me or the characters or the story all they want to. That’s fine. But issuing a call to action to have it removed from TriBeCa? Sorry GLAAD, but I already have parents and I’ll stick with deciding for myself on what I find offensive. The most interesting thing about my experience with this film is that I never expected any of this at all. I shot this with some good friends, a tiny budget, and small crew. Catering was donated, locations were donated, services were donated. I thought that we’d make the movie, it MIGHT get accepted at one festival then it would kinda just go away. I’m so grateful that it’s really gone beyond what any of us had imagined. We had our world premiere at TriBeca, Robert DeNiro defended us, John Waters called me and talked about my movie on the Joy Behar Show, it’s been amazingly ridiculous! I never expected to make a “message” movie but that’s what it’s become and it’s been a welcome surprise to me. The controversy has placed the topic of hate crimes toward transgender women on the forefront. People are talking about the word “tranny.” People are becoming more aggressive about equality and marriage and are choosing to no longer be victims. I hope that my film had a little something to do with that. Cause I think it’s time for change. It’s okay to show our anger, our frustration, our dissatisfaction with what happens around us. We’re still not equal. Let’s keep fighting until we are.

Israel Luna first became interested in film at the age of five while at a drive-in theater near his hometown of Wellington, Texas. During the family outing he was supposed to be watching the movie “Superman” but his eyes were glued to the next screen over playing “The Exorcist.” He was fascinated at how images on a screen could make people scream, laugh or cry. From that point on, he dreamt of being a filmmaker. As a young adult, Israel moved to Dallas and began pursuing that dream. Testing the waters, he produced a few segments of his original gay-themed soap opera called “Boobs, Boys and High Heels” for the local public access television network, DCTV. After achieving notoriety with the soap and gaining hands-on experience, he embarked on his career as an indie filmmaker.

In 2000 Israel co-founded La Luna Entertainment with his business partner Toni Miller. Since then, he has written and directedseveral feature-length movies and has been a creative force behind many other made-for-TV, stage and Internet projects. His accolades include: Young Filmmakers Award at the Austin Film Festival for his work on “REEL KiDS,” Audience Award for Best Feature for “The Deadbeat Club” at Dallas’ Deep Ellum Film Festival, and a nomination for Best Feature for “R U Invited?” at Dallas’ OUT TAKES Film Festival. In addition, Israel’s movie “Fright Flick” took the 2008/2009 festival circuit by storm, screening all across the country to rave reviews, making its international screening debut in Amsterdam. His latest project, “Ticked-Off Trannies With Knives,” celebrated its world premiere at the prestigious 2010 Tribeca Film Festival and will make its way to theaters this Halloween season before its DVD/VOD release in November.

Tags Ticked Off Trannies with Knives 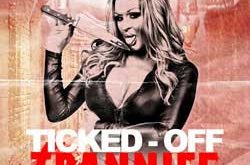