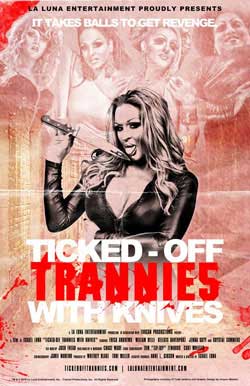 A group of trannies are violently bashed and left for dead. The surviving ladies regain consciousness, confidence, and courage ready to seek out revenge on the ones who attacked them.

A group of transvestite stage performers go out for a post-show celebration of drinking and dancing and so a couple of the…girls…can hook up with their boyfriends. The two dudes say they have an extra friend with them that night and need an extra girl. So who do they pick? Their friend Bubbles, who is just coming out of a bad, abusive relationship and wants nothing to do with these shenanigans. But thanks to peer pressure, she gives in and comes along for the ride anyway.

But this is no ordinary date night as we and the girls soon find out. Nope, it’s a setup. And the girls soon find themselves beaten, stabbed, bloody, and left for dead. So do they give up? Do they call the cops? Do they lay down and die?? Oh hells no!! This is a revenge flick, after all. The girls nurse their wounds, recover, and train harder than Po in KUNG FU PANDA to devise a plan to exact their merciless revenge on those candy-assed discriminatory bastards. Here comes the pain!!!

I know what you’re thinking. A happily married heterosexual male living in America’s Heartland – Kansas – is going to start ripping a movie like this to shreds and go all Hellfire and Brimstone preaching the evils of not only a flick of this ilk, but especially of the heathenism of being a transsexual, right? Pffffft…if you’re thinking that, then you don’t know me very well.

See, writers (or at least this one, for sure) have no place in their lives for political correctness, being uptight about certain things that may be considered taboo where we might live, or not having an open mind about almost anything…and an open mind I certainly do have. Sometimes though, when I see these titles hit my mailbox, I can’t help but wonder what in the blue hell The Big Bossman of the site is thinking. It always makes me cringe and ask my wife why in the hell the rum is always gone. After all, how many times through the years has a movie with an incredibly clever-sounding title wound up sucking hot, frosted goat balls?

But praise be to the Almighty Goddesses known as Carrie and Samantha, that’s not the case here! Revenge is a cinematic dish that it doesn’t matter whether you serve it hot or cold – it is best served well-written above all else, and writer/director Luna did a fantastic job here. That’s the beauty of the indie horror world – folks I’ve never heard of before can suddenly pour out of the woodwork and really impress the sh*t out of me. The dude also shows an almost pitch-perfect ear for dialogue and human interaction here. Keep Mr. Luna on your radar – he’s one to watch in the future.

As for the “girls” in the flick – the odds of them all actually working together in the same show down in the Dallas area where this was filmed are pretty damned slim, so let’s just chalk it up to phenomenal acting. They were gorgeous, funny, charming, talented, and when they finally flipped the Bitch Switch, ruthless and calculating…bring on a sequel!!

Research has shown me that as we speak the movie is playing in select major cities through the Halloween season, and will hit DVD on November 9th. If you’re in one of those areas and want to see this awesome sucker on the big screen, follow the link below to find current showtimes in your area:

Let’s face facts…I would have made an ugly chick. I rarely enjoy shaving my face (giving me an almost permanent Dr. House look), so you know I’m not shaving my legs. There’s only one part of my body that needs to be constantly clean-shaven and smooth, and…mayhaps I’ve finally shared too much? Moving on…

To me, this flick is best described as a drunken one night stand between THE BIRDCAGE and I SPIT ON YOUR GRAVE, and it’s the perfect tribute to grindhouse exploitation from a time that is unfortunately long gone, but certainly not ever forgotten. Part hilarious transgender comedy, part 1970s revenge flick, TICKED-OFF TRANNIES WITH KNIVES is exactly what us straight guys need to embrace our ass-kicking feminine side!!!!

Tags Ticked Off Trannies with Knives 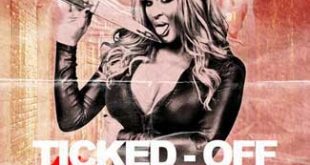 Ticked Off Trannies with Knives: November 2010