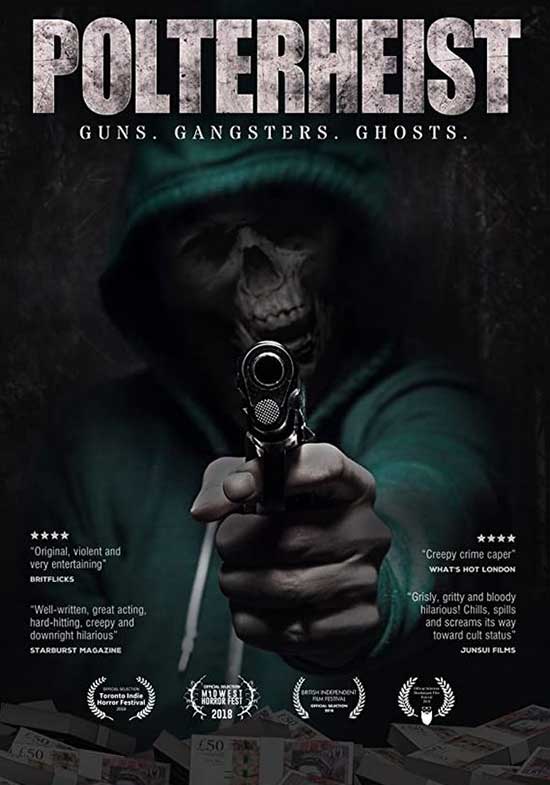 Two small time criminals in the U.K. accidentally kill their boss, and have 72 hours to find where he stashed stolen money before a local gang lord brutally kills them. Their solution? Kidnap a medium to channel their victim!

Polterheist (2018) is a comedic crime film set in the U.K. that has some supernatural tomfoolery thrown into the mix. Directed by David Gilbank as his feature length debut and with a script by Gilbank, Gemma Head (in her writing debut), and Paul Renhard (in his feature length debut), the film aims for criminal hijinks at the level of Guy Ritchie’s Snatch (2000). To freshen things up, they also throw in the fact that one of the lead cast is dead from the get-go, and must be channeled through a kidnapped medium. The whole affair is mildly successful, up until an ending that feels unsatisfying and as though too many quills were in the writer’s pot.

The plot is fairly simple: wannabe criminals Tariq (Sid Akbar Ali, Strings 2012) and rage-prone but kind-hearted Boxy (Jamie Cymbal, Seizure 2016) accidentally kill their low-level boss, Frank, while trying to find out where he stashed stolen money. Unfortunately for Tariq and Boxy, the big boss Uday (Pushpinder Chani, Emmerdale series 2010) gives them only 72 hours to find the money, otherwise they’re done for. Ultimately, the pair channels their dead pal Frank using the services of meek medium Alice (Jo Mousley, Emmerdale series 2010), and try to get his help in gathering the much needed funds.

On its surface, the plot works well, and it plays out serviceably onscreen. As Polterheist started as a short (also starring Akbar Ali), it still suffers from the telltale slow pacing common in this scenario. It’s 86 minute runtime is spot on, though, so one isn’t left checking their watch. Akbar Ali looks the part for his role, but his tough guy routine is weak; perhaps it’s intentional, given that Tariq isn’t supposed to be a great gangster, but it feels a bit off. Conversely, Cymbal does a bang-up job with the doofy and occasionally frightening Boxy, and the scenes between him and Mousley are a 10 out of 10. There’s a particular poker game scene where this reviewer felt his emotions bubble up, which is as common as the death of a sun.

The real standout in the cast is Jo Mousley, who’s initial role as soft-spoken medium Alice is shattered by her phenomenal transformation into the trash-talking Frank. The makeup for her two roles deserves credit, too, as the switch to slicked-back hair and dark running eyeshadow made the swap all that more effective. On the other end of the spectrum is Chani as Uday, who seems to have been encouraged to eat every piece of scenery, and pointlessly refers to his stable of hookers in almost every scene he has. We get it, he’s a crazy bad guy. If intended to add humor, it falls flat, and the fact that he’s related to Tariq’s character is both inconsequential and a bit confusing.

The most egregious error in the film is the ending twists, which are both unwelcome and unsatisfying. This is because the character that comes out on top is one the audience not only doesn’t care an ounce about, but is also essentially unknown to us. Why we’d want to see this character succeed or fail is a complete mystery. Tacked onto that is the “comeuppance” for Uday, which is wildly unproportionate and unbelievable. These are potentially issues stemming from having three writers dabbling in the script, and also from the expansion of a short to a feature length film. There’s often a need to “up the ante” in these situations, and they commonly result in a loss of the original magic of the short. 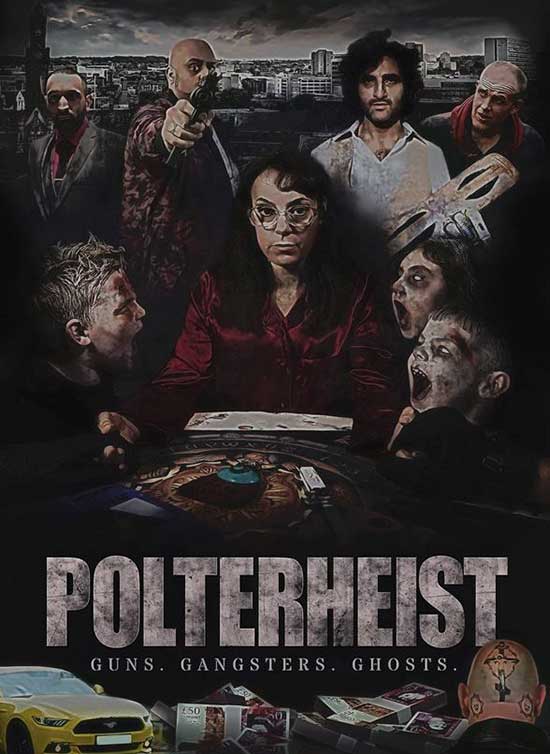 There are some genuinely funny moments in Polterheist, but there is a taste level issue at play with many of the overt attempts at comedy that left this reviewer groaning. When they succeeded, it was pleasant, but when the humor failed, it more than balanced out the positives. The crime elements were more engaging, and I’m curious how the film would’ve played with the over-the-top seriousness of, say, Killerman 2019, instead of the goofiness of Analyze This 1999.

Overall, Polterheist is a solidly watchable film, but the final few minutes are likely to spoil the enjoyment wrung from the production. On the plus side, it’s a substantial show of Jo Mousley’s acting chops, and here’s to her appearance in future features that succeed all around. If the idea of watching bumbling U.K. criminals with a small body count and supernatural elements tickles your fancy, then you don’t have many options, so you might give Polterheist a try. Just be sure to shut it off with a few minutes to go.