CONCEIVED AND PRODUCED BY AUDIO UP AND MACHINE GUN KELLY, THIS FIRST-TIME COLLABORATION WITH ORIGINAL CONCEPT BY AUDIO UP CEO JARED GUTSTADT WILL FEATURE ORIGINAL MUSIC BY MAJOR ARTISTS ACROSS ALL GENRES INCLUDING 24KGOLDN, IANN DIOR & DANA DENTATA 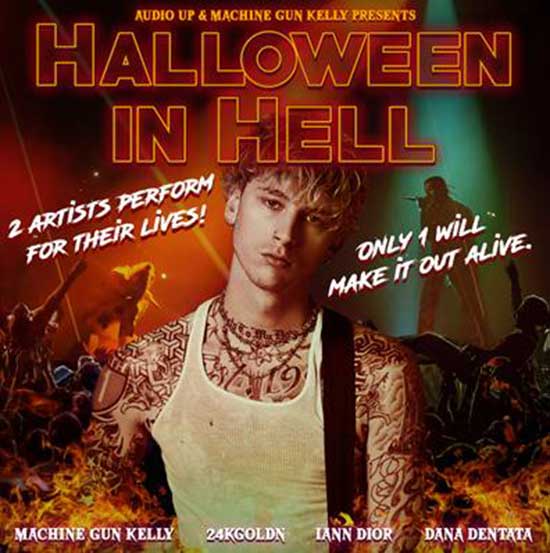 Conceived and produced by Jared Gutstadt, CEO of Audio Up, and Machine Gun Kelly, the podcast is a new take and homage to music horror hits like “The Rocky Horror Picture Show” meets the dark comedy of “The Nightmare Before Christmas.” Officially set to premiere October 10th via all podcast platforms, the series will be accompanied by a four-part making-of documentary to be released as bonus content.

Written by Jimmy Jellinek (the Webby nominated writer of the smash hit podcast, “Bear and a Banjo”) and created by Gutstadt (who has penned songs with and produced music for the likes of Bob Dylan, Lil Wayne, DJ Khaled, Timbaland and countless others), the horror/comedy/musical podcast is set during Halloween, where 24kGoldn and metal mistress Dana Dentata find themselves trapped on a soundstage reminiscent of Hell, with a sadistic host who has lured them into a competition. It is there they must impress a jury of the damned (R.Kelly & Phil Spector) and rescue themselves from the clutches of evil. With each of the main cast playing fictional versions of themselves, these acclaimed musical cross-genre performers beckon listeners to follow them on a journey to hell and back.  An original soundtrack from the series will feature new music from 24kGoldn, Dana Dentata, iann dior, and Machine Gun Kelly. Further release details are forthcoming.

Audio Up CEO Jared Gutstadt explains, “Halloween, much like other major holidays, deserves its own entertainment tent pole. While a lot of people focus on Christmas, Valentine’s Day and New Year’s Eve, we really believe that Halloween is an undersurface time of year for folks to enjoy original content. I was always a fan of ‘The Rocky Horror Picture Show’ and ‘Nightmare Before Christmas,’ and we believe we’re creating an evergreen franchise that will allow us to unlock new stories every year with original music, possibly ending up in the realm of live or visual content. Machine Gun Kelly was an extremely logical and obvious partner for us. His brand pairs well with the season.”

HALLOWEEN IN HELL was written by Jimmy Jellinek and created by Jared Gutstadt. Special music for the four-part holiday extravaganza was created by 24kGoldn, iann dior, Dana Dentata, and Machine Gun Kelly. The podcast is executive produced by Gutstadt for Audio Up Media. Machine Gun Kelly is repped by Steve Astephen at The Familie; 24kGoldn is repped by WME and Electric Feel; iann dior is repped by UTA and Electric Feel; and Dana Dentata is a recent signing to iconic hard rock

The official soundtrack of HALLOWEEN IN HELL will be released by Audio Up Records and is produced/co-written by Gutstadt, with musical contributions from Machine Gun Kelly, 24kGoldn, iann dior, and Dana Dentata.

Audio Up is a podcast content production studio, housing a world of infinite, audio-based properties. Ran by founder and CEO Jared Gutstadt (formerly of the Jingle Punks), Audio Up is building an ecosystem of premium entertainment content within the music and audio space.  From fictional scripted podcasts, which include a Marvel-like universe of musicals, where the records themselves become the story foundation, to Dennis Quaid’s unfiltered interview series, The Dennissance, Audio Up’s goal is to create a new and innovative form of IP.  They are bringing audio blockbusters to life and taking this media from black and white, into technicolor. Their upcoming slate of projects include Uncle Drank: The Totally Hammered Podcast, Make It Up As We Go with Scarlett Burke, Miranda Lambert, Lindsay Ell and other huge country entertainment names, Finding Pierre, Ego System, S’ad Land and Hero The Band to name a few.