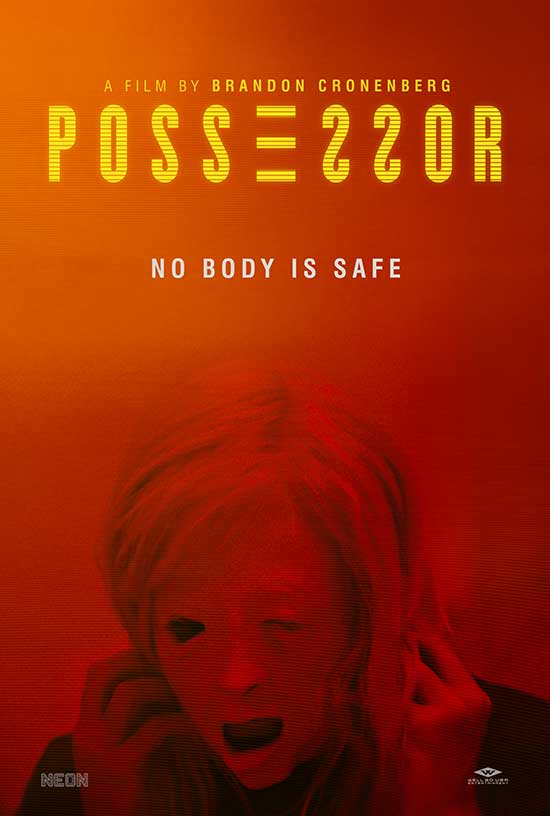 From the visionary mind of writer/director Brandon Cronenberg, POSSESSOR is an arresting sci-fi thriller about elite, corporate assassin Tasya Vos. Using brain-implant technology, Vos takes control of other people’s bodies to execute high profile targets. As she sinks deeper into her latest assignment Vos becomes trapped inside a mind that threatens to obliterate her.

The idea for Possessor came from a personal place for writer/director Brandon Cronenberg. “It was a time when things were changing in my life very quickly and I was waking up feeling this sense of absence of familiarity – like I had to scramble to form some kind of identity that made sense in that context,” explains Cronenberg. “I don’t think that’s an uncommon thing to varying degrees. I think a lot of people have those moments where either they feel like they need to play a character to present themselves or something shifts in their lives. So, on a personal and philosophical level, I thought that idea was interesting. I wanted to explore that in a sci-fi way.”

“You see people who are detached from themselves and who are dealing with that,” adds Cronenberg. “On a more satirical and political level I was interested in the corporate side. Historically, corporations would have their own armies and that was an accepted thing. I think there is a shift back to the corporation as a global power in a way that rivals a state like Google going up against the NSA. That was also part of it.  Then there is also the general invasion of privacy. When

I first started writing this the Snowden stuff was happening and everyone was very much aware of the degree to which governments are observing people and spying on citizens. Possessor is like the ultimate invasion of privacy – its someone in your life who’s actually not a person in your life.”

Despite the script going through many drafts, one of the earliest and most important scenes Cronenberg wrote was the scene where Vos wakes up in Colin’s body. “Vos wakes up as Colin in his apartment next to someone and has to play this character in the context of a domestic setting. Even though the main plot of the film isn’t about that, the seed of it really is about that – the sense of detachment from your own life and identity. That was an important scene for the genesis of the film,” says the writer/director.

“Possessor is ripe with fascinating sci-fi concepts and deeply frightening horror,” says producer Fraser Ash. “What most spoke to us in the screenplay was the human fragility of the characters. The film’s unique exploration of the innate conflict between self-interest, family and responsibility is unlike anything we had ever seen.”