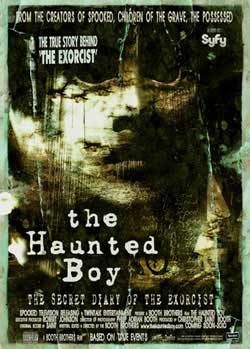 Cinematography by Philip Adrian Booth. Original Score by SAINT. Written, Edited and Directed by The Booth Brothers. RT(88 minutes) Not Rated, SD/HD format, Dolby Digital, Stereo, 5.1 Surround. DVD features TBA.
Plot Outline:
While filming a haunted asylum in St. Louis, Missouri, documentary filmmakers uncover a secret diary of the infamous 1949 exorcism involving a 13 year old boy possessed by the devil that later inspired the book and movie “The Exorcist”. Utilizing hi-tech paranormal gadgetry along with a legion of supernatural experts they search out to capture the scariest entity known to man, “The Unholy Ghost”. Nothing you have ever seen or heard before gets you closer to the ungodly truth of what really happened in this most terrifying, best selling story of all time! This is the untold-real story of “The Exorcist”, a chronicle of true events based on the actual priest’s secret diary the world was not to see, Until Now!

THE HAUNTED BOY, The Secret Diary Of The Exorcist. Based On The Real Exorcist Diary By Rev. Raymond Bishop, S.J. A new paranormal documentary film from The Booth Brothers, (Spooked, Children of the Grave, The Possessed, Death Tunnel as seen on SyFy, NBC Universal, Sony Pictures).

With all the creepy exorcism sensationalism going on lately, it was due time for a non fiction piece to arrive on the scene that wasn’t all B.S with cleverly edited hand held camera tricks. In fact, every time I turn on the TV, another “expert” is visiting distressed old buildings claiming to be able to capture disembodied spirits or evil entities. The thing I love about the Booth Brothers excursions is that they don’t claim to be expert ghost hunters, but they are expert filmmakers. Usually they enlist the aid of noted experts to accompany them while they shoot, educate and dig into the history or the locations they visit. It’s all done beautifully, hauntingly and usually leaves you with a sense of dread long after viewing.

This latest offering from the “spooked” team takes on a rather cautious tale of a boy who was the original inspiration for the film “The Exorcist”. A real tale that overshadows “The Last Exorcism” 10 to 1 with encounters that are truly frightening.

The coverage stems from true events, true testimonies as the team braves the eerie original locations with quite a few harrowing moments themselves. The original tale that inspired the film “the Exorcist” was actually based on a true exorcism event that occurred back in 1949. This event received further credibility when the original diary of the event was uncovered that details the frightful moments from the archives of Rev. Raymond Bishop. The DVD I received contained a printed copy of this very diary for those who want to read long after, though it’s the film itself that will send chills down your spine.

As all their previous projects, the Booth team lights up the screen with there flavorful brand of editing using graphics, staged footage and of course the on scene documentary footage that they based the whole film on. As we learn about the haunted boy who was documented as being possessed even at the level of the Roman Catholic Church, we discover a dark entity, demons and past tales that will scare the church right back into ya.

The crew visits 3 locations reported to be where the boy received exorcism treatments.  St. Louis, Missouri which houses an old asylum turned into apartment buildings still to this day does not house occupants on the 5th floor as recommended by the local priests. A floor that perhaps contains some remnants of evil itself is explored with some interesting footage caught on tape. What is most frightening is the visit to the previous exorcised boys house now owned by new neighbors. The room which is in renovation proves to be a visit you soon won’t forgot. A resident ghost hunter, the film crew and a physic all visit this house and let the cameras roll. Not only is the visit frightful but the captured EVP to audio words device pulls up some pretty crazy stuff. Accompanied by a masterful “Saint” score, the material sets a pretty dark mood to latch onto.

As the film rolls on, we are told about some of the original furniture deemed haunted that was removed from the locations and sealed away in a wooden box. This box now sits within a military facility never to be opened again. I found that bit of information rather unique and concerning that so much trouble was invested into a material object to be kept under wraps and careful watch. As we learn more about the boy, it appears that every location and setting that existed is under scrutiny of bad karma that had anything to do with the reported exorcism and its surroundings. At one point, I was confused by the various locations talked about, but what I got from it was that the boy was moved around a bit.

My only real complaint was that the DVD spine was backwards on the insert, which means you have to include it upside down in your movie library.

In summary, the rest is best kept reserved for the viewers to experience on there own and make there own assumptions. The production is well done, well shot and well scored. I couldn’t think of a more suitable film to play this Halloween.

The Haunted Boy: The Secret Diary Of The Exorcist (2010)