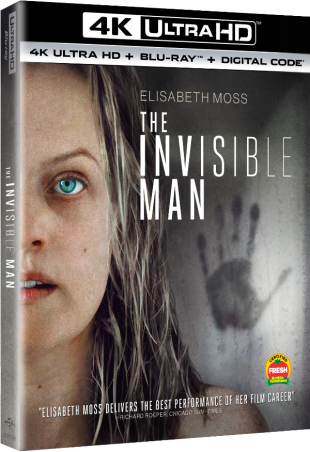 Universal Pictures Home Entertainment has partnered with HNN / Horrornews.net for a special giveaway opportunity for THE INVISIBLE MAN on Blu-ray!

THE INVISIBLE MAN, an intense, modern-day psychological thriller, becomes available to own for the first time on Digital May 12, 2020 and on 4K UHD, Blu-ray™ and DVD on May 26, 2020 from Universal Pictures Home Entertainment. From iconic producer Jason Blum (Halloween, Split, Get Out, Us) and director Leigh Whannel (Saw, Insidious, Upgrade), this psychological thriller modernizes Universal’s shapeshifting, classic monster against a backdrop of an empowered woman facing her tormentor. “A cutting, contemporary work of socially conscious horror” (Peter Travers, Rolling Stone), THE INVISIBLE MAN comes home with never-before-seen bonus content.

Here is a chance to get YOUR copy for FREE by entering our HNN / The Invisible Man Giveaway. To Enter: Email joyhorror@msn.com with “The Invisible Man Givewaway” in your subject line. In the body of the email, please include your FULL NAME and COMPLETE MAILING ADDRESS (United States & Canada ONLY). Select Winners will be chosen at random by Tuesday, May 26th, 2020.

BONUS FEATURES on BLU-RAYTM, 4K ULTRA HD and DVD:
DELETED SCENES
MOSS MANIFESTED – Elisabeth Moss describes the physical and emotional challenges she faced while portraying Cecilia, a woman whose truth is constantly questioned by those around her.
DIRECTOR’S JOURNEY WITH LEIGH WHANNELL – Director Leigh Whannell acts as tour guide through principal photography, from day 1 to day 40.
THE PLAYERS – Filmmakers and cast provide an in-depth analysis of each character and how they interact with the unseen terror of THE INVISIBLE MAN.
TIMELESS TERROR – A behind the scenes look at how writer/director Leigh Whannell re-imagined this iconic character through the lens of modern technology and socially relatable themes.
FEATURE COMMENTARY WITH WRITER/DIRECTOR LEIGH WHANNELL