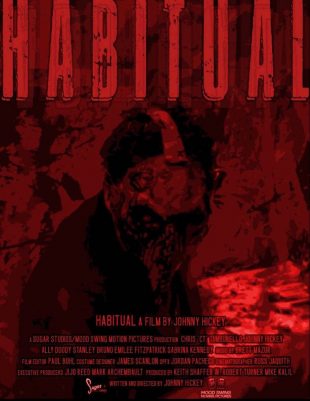 LOGLINE:
After sniffing drugs and going to a rave being held at an abandoned asylum, a group of young adults are stalked by a relentless, malevolent presence, and their grasp on reality is torn limb form limb.

A few years back, Boston-bred filmmaker Johnny Hickey brought the OxyContin epidemic to America’s attention with “Oxy Morons.” Based on his life, trials, and near-death experiences in the nascent throes of the opioid crisis, the film was a gut-wrenching wakeup call to anybody who at that point hadn’t come to understand the dangers of prescription painkillers. For his second feature film,”Habitual,” which is planned for release this coming fall, Hickey kept the theme in his macabre wheelhouse, but also dove much deeper into horror territory in order to capture the nightmare of the current fentanyl scourge.

“There’s always been bad drugs, and you’ve always heard of bad trips—that can happen with acid, ecstasy, anything,” says Hickey. “Typically people didn’t die from the drug itself in my time, but now you have fentanyl and you don’t know what you’re doing. You might think you’re doing cocaine, and you don’t really know what you are doing. Some people want the fentanyl because they want to be that high, but the real underlying message in the movie is that drugs are always going to be here whether you like it or not, and more than ever young people around the world need to think twice before taking them.”
Anti-drug bona fides aside, “Habitual” is no after-school special. The movie is a bloodbath highlighted with intense special effects and some seriously horrifying backdrops. Hickey’s crew was able to film at the abandoned Westborough State Hospital (once known as the Westborough Insane Hospital), as well as in a comparably creepy building for housing the criminally insane on the grounds of Tewksbury State Hospital in New England.

“It was 18 degrees out and there was no power,” Hickey says of Tewksbury. “We were limited to what we could do there, but the energy was wild. A ghost didn’t walk by or anything like that, but you could feel something.”

To fill those settings, Hickey said he “brought in a group of characters who were believable—not a stereotypical group of kids who get killed in a horror movie.” For authenticity, a host of MTV stars including Chris “C.T.” Tamburello, who Hickey grew up with in Boston.