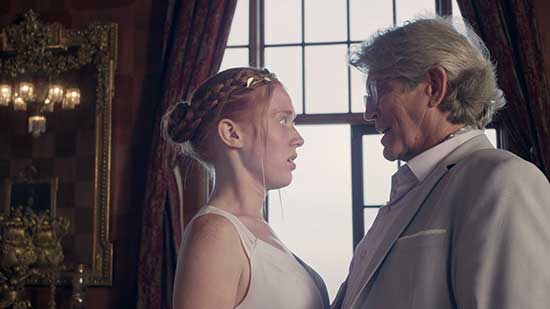 An allegory of today’s world, saturated with current political references and shocking imagery, the film’s teaser got a life of its own on social media, with shares, comments and reactions on Facebook, Twitter and YouTube ranging from WTF?!!!  and “What did I just see?! to “Which side are you on?” With one FB follower who summarized it perfectly: “Exactly what this world looks like to an outsider. Freaks and f*cks all heading down the rabbit hole.”

The dystopian sci-fi feature, which also stars up and coming young actors Arman Darbo (And Then I Go) and Chloe Ray Warmoth (Fuller House), is the coming of age story of Ulysses set in imaginary country Greatland, whose citizens, the “Greats” are too evolved to bother with government, work, education, law, technology or money. Trapped in this world of perpetual fun and inter-species love ruled by a universal Mother, Ulysses must cross the forbidden frontier to save his childhood sweetheart, as an absurd election and a deadly Virus lead to chaos and violence.

With the future of traditional distribution system put in question by the pandemic, GREATLAND takes a new and innovative approach to promotion by engaging directly with its target audience. Given the timeliness and prophetic nature of the movie, the film creators are encouraging questions from the audience and answering them online thus engaging them in the complex and very original world building of the indie film all the while staying grounded in the contemporary political landscape.

GREATLAND, produced by Igor Darbo under his Popcorn & Friends banner, will be released later this year. —ENDS